BC Ferries Quarterly Report charts financial plans for years ahead

British Columbia Ferries has released the results of their second quarter financial report noting that there has been a reduction in revenue generation over the course of the last year, with year to date net earnings listed at 96.9 million dollars, close to 19 million dollars lower than the same period last year.

Much of the decrease comes from fare reduction initiatives that were introduced in 2018, as well as increased service on the larger runs of the Vancouver-Vancouver Island services.

Among the fare reduction programs put in place were, a reduction of 15 per cent on all but the three Metro Vancouver – Vancouver Island routes, where fares were held constant.

As well,  the B.C. seniors’ passenger discount was increased from 50 per cent to 100 per cent for travel Monday to Thursday. BC Ferries and the Province are funding these fare initiatives over two years.

Operating expenses were on the rise for the Ferry Corporation through to September, jumping close to 14 million dollars, that rise attributed to the cost of additional sailings and schedule adjustments.

Part of the increase also came from the introduction of a new direct route between Port Hardy and Bella Coola, with BC Ferries making note of the additional coasts for labour, fuel consumption and training that were required.

Included in the Capital expenditures listings were the introduction of the new Island Class vessels currently under construction,  upgrades to  the Spirit Class vessels and the work required on the Northern Sea Wolf program and terminal modifications for that new service.


The Northern Sea Wolf run has had its problems this year, delays in getting the former Greek marine vessel into service in British Columbia waters saw BC Ferries having to make use of existing vessels and reshuffle the late summer schedule for the Northern Adventure to address the renovation issues that popped up along the way this summer.

The future for Capital expenditures is also explored in yesterday's review, with BC Ferries making note of its 12 Year Capital Plan and their ambitions for investment of more that 3.9 billion dollars into the service, making it the largest capital plan in BC Ferries' history.

The program would see  BC Ferries upgrade its fleet and terminals, introduce alternative energy sources, as well as to make a heavy investment into its Fleet Maintenance Facility.

“Our capital plan will help to ensure a sustainable, future-ready, efficient marine transportation system, while delivering an exceptional and affordable customer-focused travel experience,”  ...  “In developing our plan, we recognize that decisions we make today must consider the way people will travel tomorrow. We are planning for a more resilient ferry service that takes into account the energy transition to a lower carbon future and that can address customers’ interests in the areas of reliability, affordability and choice.” -- Mark Collins, President and CEO of BC Ferries 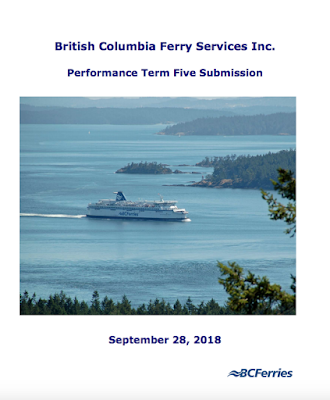 The investment plans are part of the recently delivered its Performance Term Five Submission to the BC Ferries Commission.

The document which you can review here, outlines the range of programs and financial planning that BC Ferries has in mind, covering off Five responses for the Commission:

Among the many elements explored in the document, the report charts forecast growth over the next five years for the various runs that BC Ferries offers 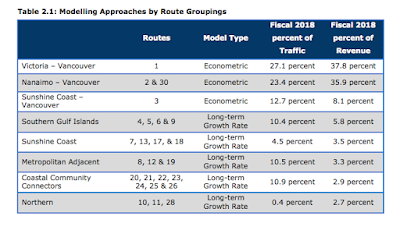 The BC Ferry Commission reviews the plans and forecasts every four years, with the Ferries Commissioner establishing price caps for routes specified for the four year performance term that will follow.

The deadline for public comments on the BC Ferries submission is January 31st, you can learn more about the process here.

Commissioner Sheldon Stoilen, will make his final determination on BC Ferry's most recent submission by September 30th of 2019.

You can learn more about the work of the BC Ferries Commission here.

For more notes of on interest on Marine Transportation on the North Coast see our archive page here.

Email ThisBlogThis!Share to TwitterShare to FacebookShare to Pinterest
Labels: BC Ferries financial plans