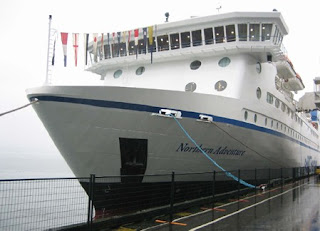 With the busy summer season now over for the North Coast and Haida Gwaii, BC Ferries has shifted the Northern Adventure to the Central Coast, where the vessel will service the new Discover the Great Bear Rainforest route for the early part of the fall.

The Northern Adventure repositioned on Friday, September 14th, set take up its duties on the route which transits between Port Hardy and Bella Coola.

The temporary assignment will see the 117 metre vessel offer a day cruise along some of British Columbia's unspoiled wilderness, boasting accommodation for 640 passengers, it will offer the largest volume of potential visitors to the region that has been offered yet by BC Ferries.

BC Ferries launched the route by highlighting that access to wilderness as part of their announcement of earlier this month.

“Our new route offers direct ferry access from Port Hardy to Bella Coola to open up all the natural wonders of the mid-coast and Great Bear Rainforest,”  -- Janet Carson, BC Ferries’ Vice President, Marketing and Customer Experience.

The Northern Adventure is filling in for the Northern Sea Wolf, which BC Ferries purchased out of Greece specifically for the Central Coast route, however delays in refitting the vessel for use in British Columbia meant that the much anticipated launch of the ship into service did not take place this summer as originally planned.

BC Ferries has not provided any updates on the fate of the Northern Sea Wolf since they announced the temporary fill in status for the Northern Adventure back in early July.

The lack of a large capacity vessel for the route this summer was the subject of much disappointment for travel operators in the region, to try and make up for the lost opportunities of the summer, BC Ferries has introduced  a pricing promotion from now until October 11th for travel that is booked by the end of September.

For that period of time BC Ferries is offering Adult passenger fares at just $99, down from $169 and standard vehicle and driver fares start at $298, down from $505.

B.C. senior and child passenger fares are also discounted during the promotional period, as well as motorcycles and extra length passenger vehicles.

The North Coast and Haida Gwaii will continue to be served by the Northern Expedition through the fall months, though travellers are no doubt hopeful that its recent spate of mechanical issues will be of the past and not an ongoing issue.

The Northern Expedition has suffered a number engine related issues since the BC Day holiday period, with the most recent incident noted last week.

Email ThisBlogThis!Share to TwitterShare to FacebookShare to Pinterest
Labels: Northern Adventure takes up duties on Central Coast until mid October