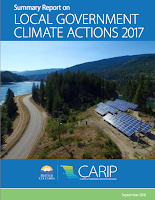 The second day of convention work at UBCM found Prince Rupert Mayor Lee Brain spending a good portion of his time on issues of Climate change and sustainability, with the Mayor taking part in some of the symposiums, meetings and work shops on a range of environmental themes.

In a Facebook post to the Mayor's political portal on Tuesday, Mr. Brain called attention to a few of the themes that he, Prince Rupert council and other Northwest politicians have explored over the last four year.

Flagging the electric charging network along the Highway 16 corridor as one area of note that the communities of the North are actively pursuing.

Mayor Brain also made note of his Sustainable City 2030 policy plans which will explore areas such as local energy, food production and waste diversion, curb side recycling to name a few. 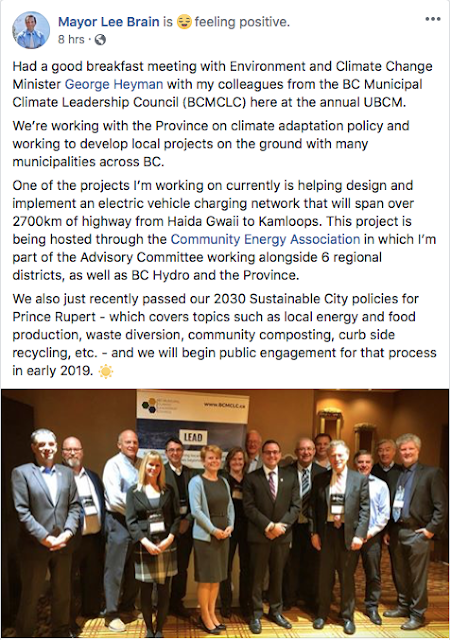 Mayor Brain delivered a review of his Sustainable City plans for City Council in June, you can explore the themes and the presentation to Council from our blog item here.

As part of the UBCM gathering on Tuesday, the British Columbia government rolled out some grant funding announcements on the day as well, explaining how Local governments that report annually on the actions they are taking to reduce their carbon footprint are eligible for the Climate Action Revenue Incentive Program (CARIP) grant.

Not surprisingly, of that seven million dollar pool of money, the largest amount of grant funding was recorded by the City of Vancouver at 1,127,419; the smallest grant amount went to Hazelton at $297.

Other levels of funding for the Northwest and Haida Gwaii include:


The full list of funding for all communities across British Columbia can be found here.

George Heyman, the Minister of Environment and Climate Change was host for the Tuesday events, noting the leadership that is required at the local level to achieve goals and ambitions on the issue.

“Local governments in British Columbia are integral partners in meeting our climate action goals, showing tremendous leadership and commitment,” ... “I welcome the communities who have achieved carbon neutrality for the first time this year. Our government is focused on seeing strong, sustainable and clean economic growth that makes life better for people living in B.C.”

More background on the events related to environment and climate change from Tuesday can be reviewed here.

The Province also recognized the communities of British Columbia for their efforts on Climate issues, putting the spotlight on the four levels of achievement towards Carbon Neutral status that have been reached at the municipal level.

187 out of 190 local governments have demonstrated a level of commitment to addressing climate action at the community level and have signed on to the B.C Climate Action Charter.

From top to bottom, the four categories that indicate their level of success included:

Prince Rupert, Port Edward, The Village of Queen Charlotte and the North Coast Regional District were among those listed in the last category, noted as part of the 36 communities in BC who have demonstrated some progress on Charter commitments.

In the Northwest, the Regional District of Kitimat-Stikine and Granisle were the only two locations to  achieve Carbon Neutral status from the region.

A look at the full Summary Report on Local Government Climate Actions for 2017 can be found here.

Three days remain on the UBCM Schedule for Convention week in Whistler, you can review our archive of notes from the gathering of government officials here.

For more notes on the Sustainability initiatives in Prince Rupert see our archive page here.


To return to the most recent blog posting of the day, click here.
Posted by . at 9:03 AM

Email ThisBlogThis!Share to TwitterShare to FacebookShare to Pinterest
Labels: Mayor Brain and climate issues at UBCM