With but one rail crossing within the City of Prince Rupert limits, the potential for incidents between motorists and trains is somewhat limited, however with a very active waterfront rail yard and a corridor of transit, and multiple crossings through the District of Port Edward, Rail Safety is a prominent concern for both communities and the railway.

It's an issue that has been the focus for CN Rail this week, with September 23 to 29th declared as Rail Safety Week across North America.

As part of the program towards safety around railroad tracks and yards, CN Rail is asking residents of the communities it serves to take the Rail Safety Pledge, offering up a multi media presentation to deliver the message of rail safety. 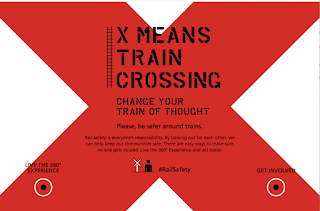 The 360 degree experience provides information for both Pedestrians and Motorists, highlighting the dangers for both when it comes to transit across and around rail infrastructure.

As part of their Safety campaign, CN makes note of the large volume of rail crossings that still exist across Canada and the US, as well as the number of accidents that have taken place.

A strong part of the focus is the issue of trespassing on Rail property, a situation which frequently brings CN Rail police officers to the Prince Rupert and Port Edward waterfronts to remind residents that the rail yard and tracks are not available for public access, as well as to the dangers that the shuttling of engines and their cars along those tracks can bring.

The attention towards that concern has grown over the last few years after a number of incidents in Terrace where deaths have resulted as a result of pedestrians walking on rail property.

Stephen Covey, CN's Chief of Police and Security addressed the national issue with a statement that delivers on the themes of Rail Safety Week.

“Too many people die while trespassing on railway property and those fatalities are entirely preventable,”  ... “These tragedies can be avoided by staying off railway tracks and by simply obeying crossing signals. With Rail Safety Week coinciding with the back to school period, we are encouraging parents and teenagers to change their train of thought and be safer around trains.”

More background on the week long focus on Rail Safety is available here.

For more items of interest related to CN Rail in the Northwest see our archive page here.


To return to the most recent blog posting of the day, click here.
Posted by . at 10:18 AM