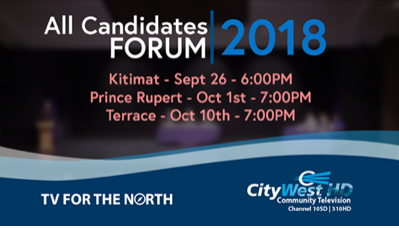 As the residents of the Northwest head towards October 20th and the opportunity to shape the future of their communities for the next four years, cities across the region are preparing to host their local Civic election forums.

Those public events make for one of the few times that residents can take the measure of those seeking office and to hear about how they plan to approach their time in office and what direction they believe their communities should be heading towards.

For those that may not be able to attend the forums in person, or miss the event owing to other commitments, CityWest the Northwest communication company will be covering the Civic forums in three communities next month.

Starting tonight, CityWest will be broadcasting the events through its Community Events Channels (10  SD and 310 HD) from the following locations.

As well, the stream cast of the forums will be available to watch on the CityWest Facebook page on the night of each event.

Devon Wall, the CityWest Community Channel Manager observes on how the broadcast of the debates have become a tradition in the region and one that has been well received by its subscribers.

"We’ve broadcast election debates for a number of years because we feel they’re important to the democratic process of the communities we serve,” ...  “They have also been very popular with our customers, and we’ve noticed very strong viewership numbers in past debates."

More notes related to the CityWest broadcast schedule and any replays that may be provided in the lead up to election day can be found on the CityWest Facebook page.

For further background on the 2018 election developments from across the Northwest can be found from our two archives below:

Past items of interest related to CityWest across the Northwest can be reviewed on our archive page.

To return to the most recent blog posting of the day, click here.
Posted by . at 8:58 AM