The program which tracks marine incidents in British Columbia has added Saturday night's incident on Haida Gwaii to its data base, making note of the introduction of a Unified Command to oversee the work ahead, though as the Spill and Environmental Emergency program notes there is no spilled content to contend with just yet. 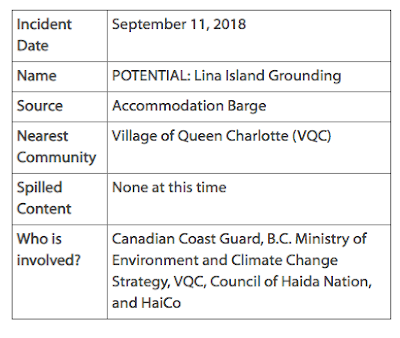 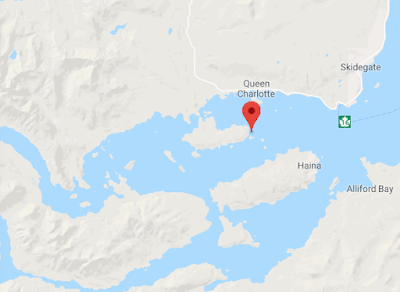 The update from the program which was issued at 1 PM today notes that the barge is stable and no pollution has been observed in the surrounding environment.

The incident is being overseen by a Unified command with representatives from HaiCo, the Council of the Haida Nation,  Village of Queen Charlotte and the Canadian Coast Guard.

The Unified Command structure has retained the services of contractors to monitor the situation and develop a plan of action to address the situation.

Among the resources on station is the Canadian Coast Guard Ship Gordon Reid.

You can review the file and updates that will be added to it here.


HaiCo which owns the WestCoast Resorts luxury fishing barge in question issued an update on the situation on Tuesday afternoon.

The updated details outlined the following work on the day:

The barge is rested at Guudaa Kunt'as Gwayy-yaay, Lina Island, and an Exclusion Zone has been established. A small amount of pollution has been observed and steps have been taken to contain and recover where possible. Continual air quality monitoring will occur around the incident site to ensure safety of all response personnel.

Today, the operations team focused on inspecting the underbody for damage while conducting air monitoring. During the inspection, where possible, manhole patch covers will be opened to increase natural ventilation. Time and air quality  permitting, the team will secure the barge to the beach.

Some background to the weekend incident can be found from our previous blog entries found below:

More notes related to the work of Emergency Responders in the Northwest and Haida Gwaii can be found here.