As negotiations continue and strike vote taken, plans also being made in event of postal disruption

Canada Post and CUPW the union representing Postal Workers are continuing with their talks this week as part of the process of work towards a new contract,  the current contract having expired back in December of 2017.

However, as the talks continue, the indications from the union to this point suggest that things aren't going all that well towards a resolution of outstanding issues.

The latest update for the CUPW membership reviewed the most recent offer from Canada Post and among four key issues, Job Security, Pay for all hours worked, Hourly rate of pay and Guaranteed number of minimum hours, the Canada Post proposal it seems is not what CUPW is looking for. 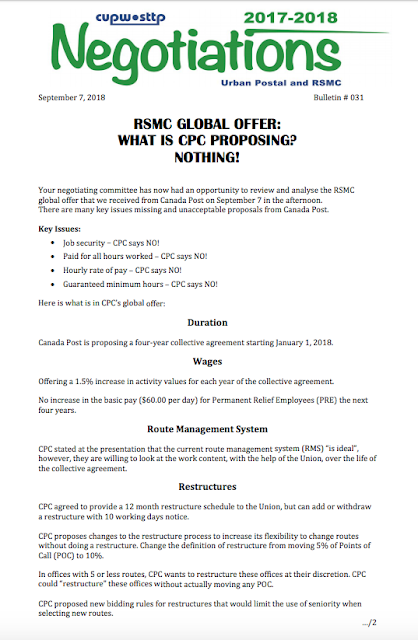 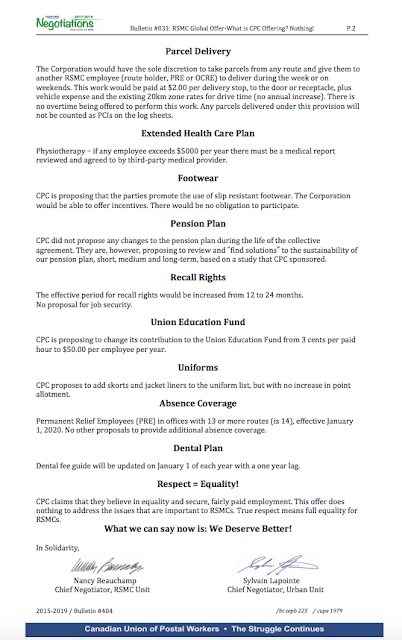 Over the weekend, the CUPW membership took part in a strike vote, the results of which have yet to be released, though it is expected that the union leadership will reveal the vote numbers sometime this week.

Should they have given their union leaders the go ahead, a strike could begin as early as September 26th, that date is also the timeline for Canada Post which could also lock out its workers if that is the path they choose to take.

For Canada Post one of the issues that the mail and parcel service is dealing with is the latest reports of a second quarter loss of 242 million dollars, which the company explored further in late August.

From that review some ongoing trends continue to follow familiar paths from recent years, with parcel delivery results now the main area of revenue for the Postal service, while surface mail levels continue to decline as Canadians shift their focus there towards electronic themes.

As for the union, a look at some of the goals that they had in mind as the negotiations got underway can be reviewed here.

Somewhere among the growing list of talking points, will be where those at the bargaining table will look to resolve the current impasse that stands in the way of a settlement at the moment.

Further updates for the CUPW membership can be found from the CUPW website.

The collective agreement expired in December of 2017

Some of the issues at stake in the negotiations can be reviewed from the items below:

Update: CUPW released the results of their strike vote, with the membership providing a strong endorsement of strike action, should negotiations not lead to a contract settlement.


For more notes of interest on the local labour scene see our archive page here.

To return to the most recent blog posting of the day, click here.
Posted by . at 11:20 AM