Among the many activities that make for the five day calendar at UBCM, the opportunity for local officials to have a few minutes with provincial government ministers is always a highly sought after appointment, offering as it does a chance to raise particular issues of concern for each community.

On Tuesday, Transportation Minister Claire Trevena put out the "Minister is In" sign at UBCM, taking to her social media account to note how she was looking forward to the opportunity to hear from the provinces local officials. 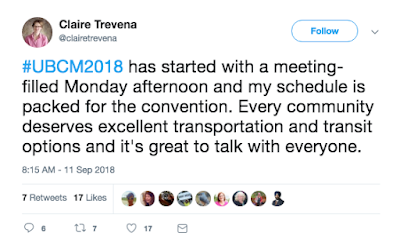 And from those booking their time with the Minister, Haida Gwaii's Mayor Andrew Merilees of Masset, took advantage of the session to touch base on the list of Northern concerns related to BC Ferry service to and from the Islands.


The North Coast Review made note of some of those issues August, with the Mayor of Masset providing us with a thumbnail sketch of some of the themes that officials on Haida Gwaii hope to gain some traction on.

We followed up on those issues with Mayor Merilees today, and from his notes, the session with Minster Trevena provided for a few areas of interest for the months ahead.

Among some of the takeaways were:

The Provincial government is now in receipt of the results and recommendations from a study that they initiated on BC Ferries, with government officials currently reviewing the data.

The plan moving forward is to release the report to the public sometime this fall. 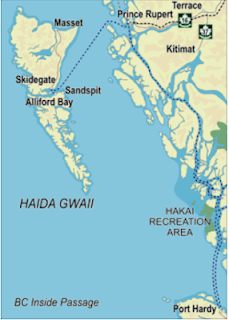 One item that seemingly won't be the focus of discussion, is a call from Haida Gwaii and the North Coast for BC Ferries to be brought back under the umbrella of the Ministry of Transportation, which the Province is apparently not considering at this time.

That suggestion was one that both Haida Gwaii and the North Coast had identified as a necessary change, with the current quasi privatization service one that they consider to have been a complete failure.

The Masset delegation also expressed their ongoing concerns over scheduling to and from Haida Gwaii, as well as a number of issues with the Reservation system.

They also took up the concerns on the island over the nature of the service of the MV Kwuna which runs between  Graham and Moresby Islands, a service which Mayor Merilees describes "as leaving their neighbours in Sandspit living in a form of  forced isolation"

As noted above, officials on the North Coast and Haida Gwaii are awaiting the release of the report by the province later this fall and will have further comments related to the findings upon its publication.

It's not clear if Mr. Merilees was aware of the latest set back to service on the North Coast of this week, with engine issues affecting the schedule of the Northern Expedition.

However the ongoing mechanical issues for the Northern Fleet may also make for some further discussion themes, should the delegations from the North Coast and Haida Gwaii run across Minister Trevena again before the convention ends on Friday.

For more items of note related to UBCM 2018 see our archive page here.

A wider overview of Marine Transportation on the North Coast, Haida Gwaii and Southeast Alaska can be reviewed here.

To return to the most recent blog posting of the day, click here.
Posted by . at 2:05 PM