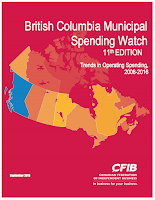 The accountants of the Canadian Federation of Business have crashed the UBCM party at Whistler, offering up some cold hard reality on fiscal matters for the consideration of the delegates in among all the excitement of convention week.

The organization that serves as advocates for Small and Independent Business, released their annual costing analysis of municipal government spending on Wednesday.

The release of their annual review which in recent years has come in the late fall,  was moved up in time not only for consideration at the annual convention gathering; but prior to British Columbians going to the polls in October to vote in the Municipal elections that will put representatives into place for another four years.

The report tracks municipal spending growth and their findings each year have seen spending grow beyond a sustainable rate, which raises the financial burden on British Columbians, including entrepreneurs.

In the Opening remarks of this years report the CFIB notes that between 2006 and 2016, municipal spending increased 43 per cent while BC’s population only grew by 12 per cent.

Something that the CFIB states is far above the benchmark for sustainable operating spending growth, which has as a goal to keep spending at, or below the rate of inflation plus population growth.

The introductory remarks also note that if municipal spending had been kept in line with that benchmark, the average family of four could have saved $7,695 in municipal taxes over this 10 year period.

The report adds that it is clear that the current rate of municipal spending is unsustainable, municipalities have many opportunities to innovate and trim excess costs while providing better services.

As well, the review highlights some of the best practises that some BC municipalities have adopted to curb costs.

The methodology of their rankings is explained below, with the CFIB report putting an equal importance on a municipality's long term spending trend and its latest spending habits.


The focus for the Municipal Spending Watch for this year was to examine short term trends from 2015-16, Municipal spending trends and public sector wage impacts.

As well the review examined Municipal revenues and property taxation.

For Prince Rupert, the stellar placements of the last two years, have taken a rather sudden and significant drop from the numbers compiled from the 2016 data.

In the 2015 report Prince Rupert had posted a 39th place listing,  that placement providing for a decline from the 2014 data review, when Prince Rupert had been pegged at 9th overall, marking one of the highest placements that the City has had through the decade of CFIB reports.

Those 2014 numbers a reflection as to the limited resources available to the  city at the time, as well as other financial and budgetary decisions made by the previous City Council led at the time by Mayor Jack Mussallem.

This years report, based on 2016 figures drops Prince Rupert 87 spots in the CFIB rankings, with the City now listed at the 126th spot, of the 152 communities listed from Best to Worst as part of the review.

The report notes an increase of 41 percent when it comes to Real Operating Spending per capita growth from 2006-2016 for Prince Rupert.

The ten year period from 20016-2016 also noted that there has been a 14 per cent decline in population as per the BC Stats used for the CFIB report.

Some of the increase in Operational spending most likely comes from the surge of staffing appointments made at City Hall in recent years, along with increases in civic salaries over the same period of time, the details of which only now are starting to appear on such listings as the annual SOFI reports for Council members and civic employees.

As well, a number of projects hosted by the City of Prince Rupert started to move forward during the period of the CIFB review, a situation  that wasn't in motion in the previous reporting periods.

Port Edward was placed at 143rd spot making for a two point shift upwards from tis placement of 145 in 2015.

The report notes that there has been an increase of 39 percent when it comes to Real Operation Spending per Capita Growth for the District.

The ten year period from 20016-2016 also noted that there has been a 19 per cent decline in population as per the BC Stats used for the CFIB report.

The 2016 placements for Other Northwest communities look as follows: 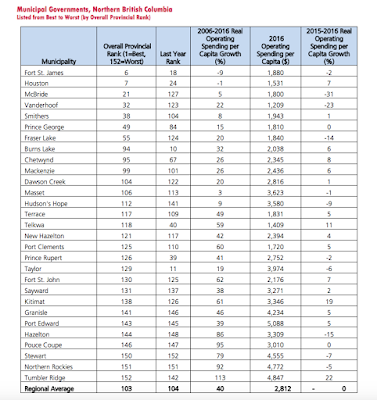 The Conclusions and Recommendations from the report offer up five themes for municipal leaders to consider.

1. Limit increases in operating spending growth to no more than inflation and population growth.

3. Limit increases to wages and benefits

4. Take measures to reduce the gap between what individuals pay in property taxes and the amount paid by small business.

More background on the fiscal data, range of themes and observations and recommendations from the review can be examined further from the full CFIB Report here.

Those looking to compare the results from this year compared to last, can explore the review from our notes from 2017 report

A wider overview of City of Prince Rupert financials is available on our Budget planning archive page.


To return to the most recent blog posting of the day, click here.
Posted by . at 9:26 AM