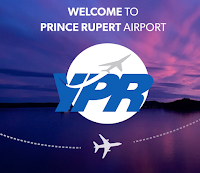 Oversight of operations at the Prince Rupert Airport has once again become a bit of a hot topic in the community.

That as a former Airport Society member takes issue with some perceptions as to how things have changed since the City dismissed members of the Airport Board and installed three civic officials to it.

At the time of the change in April of 2017, City staffers Paul Venditelli, Richard Pucci and Rory Mandryk were appointed to the Board, part of a new focus on airport issues by the City.

As Mayor Lee Brain announced the change to the Board structure, he noted that "these changes were made to improve communication and organizational coherence between the airport and the ferry and the bus service that brings passengers to the airport"

As part of the change of direction from last year, the mayor cited what he called "disconnection in the chain of transportation services" as one of the key logistical concerns, with a focus on lengthy delays a signficant focus for the city.

Last month, the Northern View caught up with Paul Venditelli from the Airport Board, who offered up an improving picture on the theme of baggage turnaround and logistical issues.

The tone of the article seemingly suggesting that those achievements were realized after the constitution to the Airport Society had been change to include the city staff members.

It was a theme that caught the attention of former Airport society board member Judy Fraser, who composed a rebuttal of sorts to the article, taking issue with a few of the points and how the new board's work was portrayed.

Ms Fraser notes in her short, but to the point address that the City had always been in charge of the baggage handling options and could have made the changes currently being championed at any time.

Observing that on a number of occasions, the volunteer board had sought out the city to address what had been one of the larges complaints of travellers through YPR.

"During my time as a volunteer on the society we met many times with city officials asking them to streamline the operation because that was where we got most of the complaints from but we were helpless to make improvements as that was not part of our mandate."

" I am happy that some changes have been made but want the public to know that these changes had nothing to do with changes in the constitution. The original terms of the constitution were put in place so there would be no political interference in the operation of the airport and with the election this fall I can see this happening now."

You can review her full correspondence on the issue here.

The return to the debate over how the City has approached the oversight of the Airport is just the latest in correspondences on the theme since the move to add City of Prince Rupert officials to the Board last year.

Last May the change in direction by the City made for much in the way of discussion through the letters to the editors page.

However, as we noted at the time, the topic has not made for much in the way of public discussion at a Prince Rupert City Council session and that's a theme that has continued well into 2018.

Through the full year of City Council sessions so far in 2018, the Airport Board  was not called upon to provide any form of an update for residents on ongoing developments at the airport.

As well the City website, and the Prince Rupert Airport Website offer little in the way of information related to airport issues or concerns.

At the September 4th Prince Rupert Council meeting, Councillor Barry Cunningham renewed his call that Council should be hosting  more Public information sessions from organizations and societies that the City provides funding towards.

Considering the strong interest in the community when it comes to Airport issues, having Mr. Venditelli and the board provide an update for Council and the public might be a good way to start the ball rolling towards more transparency on airport themes.

For more items of note on Transportation in the northwest see our archive page here.

Email ThisBlogThis!Share to TwitterShare to FacebookShare to Pinterest
Labels: Push back from former board member on airport perceptions