A weekend of sun to herald the start of fall, brought Rupertites and visitors alike to the Cow Bay area in large numbers through Saturday, with the crowds finding much to keep themselves busy with.

Starting with the arrival in the morning of the Seaabourn Sojourn at Northland Terminal the city's tourist section became the happening spot on the city map for Saturday.

As cruise ship visitors dis-embarked for their ten hour stop over in Prince Rupert they headed off in many directions, some sticking close to the city centre, others off on tours and expeditions.

Among the options for this Saturday was the Trading Coast Outdoor Market set up at the Hecate Strait Business Development offices, making use of the eastern parking lot of the location organizers had a number of tents and exhibits set up for locals and visitors alike, with a steady stream of the interested walking through the gate to see what was there to take in.

The results of the day, something which will give the organizers some important feedback as they work on plans to perhaps make the Trading Market a full time fixture on the Prince Rupert scene in the summer of 2020. 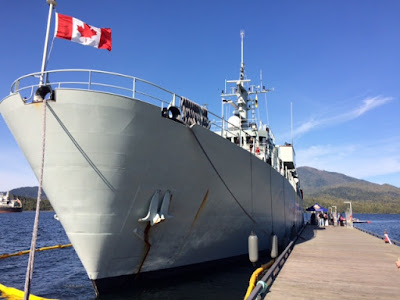 Another popular spot in Cow Bay Saturday was the city's Waterfront Dock, where the HMCS Whitehorse had berthed. The Esquimalt based Kingston Class Coastal Defence vessel of the Royal Canadian Navy has been on operational duties around the North Coast and had pulled into Prince Rupert on Friday evening.

Saturday many Rupertites, cruise ship visitors and others in town for the day took advantage of the public tours that were underway, learning more about the details of the ship and what its missions are in service of the country.

Those in Cow Bay seemingly couldn't get enough of learning about the waterfront, with the Port of Prince Rupert Interpretive Centre/Prince Rupert Tourism location at the Atlin Terminal also finding some strong traffic through the course of the day.

The sun filled start to fall also brought out a large crowd to the Mariner's Park area, with families holding picnics and spending time at the Children's park on the bluff overlooking the harbour and Cow Bay.