The official word from the Chief Electoral Officer has yet to be posted to the city's website, but as the deadline for challenges to the 2018 nomination process for Municipal office came to an end on Tuesday and with no apparent challenge noted, Mayor Lee Brain took to his social media page yesterday to share a few observations on his successful acclamation to another four year term in office.

Posting his comments through his political Facebook page, the Mayor made note of the great honour  the opportunity presents to serve the community for another four years, as well as to express his gratitude for the support he has received in the community.

The social media post makes for the most part the kind of commentary that would have come with a victory speech following an election campaign, however one without the obligatory need to thank the competitors and make note of a hard fought campaign to return to office.

His commentary also indicates that he will remain quite visible during the campaign period leading up to the October 20th election day.

And while it's good that the Mayor will remain available to reflect on the last four years and preview and speak to his plans for the upcoming term, hopefully his presence along the campaign trail won't eclipse the efforts of the eight contenders that are contesting Council seats.

Those twin races for the key municipal and school  positions is where residents and voters in Prince Rupert should now be turning their focus towards.

With voters tasked with giving some strong consideration as to what the group of six to sit with the Mayor in Council should look like, as well as to make their decisions towards sending a strong contingent of representatives to the School Board. 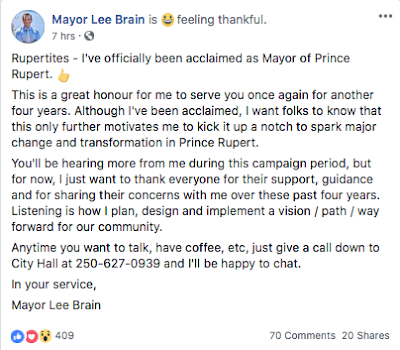 For more items of interest related to the 2018 Municipal election campaign see our archive pages below:

To review the work of the Mayor and current Council over the last four years see our archive of Council Discussion topics, where the current of community challenges and civic policy decisions is chronicled.


To return to the most recent blog posting of the day, click here.
Posted by . at 9:47 AM

Email ThisBlogThis!Share to TwitterShare to FacebookShare to Pinterest
Labels: Mayor Brain on his acclamation