It's a brand new vista over on McKay Street, as city crews clear land for new dog park


There's some significant work taking place on the city's west side this week, with city crews taking to the field at the corner of McKay and Kootenay to transform what was once a forest of over grown weeds and scrub land into a wide open prairie of sorts, ready for the next step in the redevelopment of the area. 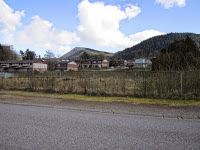 We first heard word of the work through an email from a reader who was curious as to the nature of the pace of activity that was taking place and what it all might be related to.

To seek out more information on the project, the North Coast Review forwarded an email to Veronika Stewart, the city's Communication Manager.

Asking if the work was part of the planning for the other elements of the McKay Street park project, and if the work was coming out of some other city budget for public works projects.

"The City crews working in that area are installing a dog park, which was planned to accommodate resident dog-owners who were displaced when the Doug Kerr Field reopened to minor baseball. This information was released when the Doug Kerr field refurbishment was announced and is part of planned works for the year"

The City's Communication Manager also noted that further information will be released through the city's website and social media accounts once they have a clearer picture of the dog park's opening date.

Some further background on the Doug Kerr announcement and the move of the dog owners to a temporary off leash location at McClymont Park can be found from our blog item of March 7th.

At the time of the City's Doug Kerr announcement of March, it was noted that fundraising for the dog park section at McKay was underway, with the park installation anticipated by the fall of 2018.

The pace of that fundraising, or the level of its success to this point however isn't known, as there have been no updates in recent months on that theme.

The site that has been cleared this week was previously identified in the Transition Prince Rupert plans as the potential location for some of the future concepts for the McKay Street Park, which saw its first stage completed earlier this year, but not before some remedial work had to take place to bring the site up to proper specifications.

The local community action group was the lead organizer for the playground project, that concept and the future additions, including the proposed dog park, coming out of an extensive Placemaking conference in 2016, hosted by Transition Prince Rupert and sponsored in part by the City of Prince Rupert.

Part of the focus of the McKay Street plans was how the project would be community funded with some strong attention towards the volunteer nature of the work to be done on site.

For the first phase of the plan for development of the community playground of November of 2017, City workers and their union CUPE had signed off on the concept of volunteers doing some of the land clearing that might normally be done by city crews.

The recent work of the last week or so does make for some good preparation for the dog park, with the current site work appearing to be back under the domain of the City's operations department work force and part of the city's budgeting.

The impressive bit of land clearing for the McKay Street area comes in the same week that Councillor Barry Cunningham raised the issue of some of the city's other long dormant park spaces.

Considering the extensive amount of work at McKay, he may want to return to the discussion themes on park planning at the next council session of October 9th.

First to seek a public update on the nature of the status of the work related to the Dog park project and if there has been any further cost to the city related to it.

Then to see if the city can shake a few extra dollars out of the budget to help move the goal of improved park space for other neglected areas of the community a little further ahead on the timetable.

To return to the most recent blog posting of the day, click here.
Posted by . at 11:19 AM