Will the Hays 2.0 plan be the dominant theme of the 2018 City Council election? 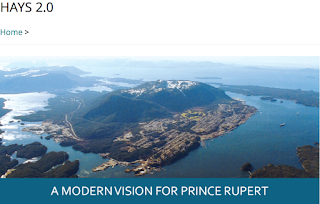 He won't have to face any challengers for office after being acclaimed to the Mayoralty for another four year term, but Mayor Lee Brain's footprints in the 2018 Council election would seem to loom large over the next six weeks.

With his signature document of the Hays 2.0 vision plan seemingly one that many of the current council and at least one of the challengers for a seat so far seem to be wrapping themselves up in.

Considering the support given to the  Hays plan during the course of the soon to end four year term of this council, the four incumbents looking for a return to office would appear to be firmly on board with the continuation of the plan.

Collectively they have spoken favourably to the topic at Council as the project and the previous seeds of it of the LNG Go Plan and Planning for major projects began to take shape.

While Councillors Niesh and Randhawa tend to keep to a lower public profile on topical issues, the other two council members have a much wider social media platform for pronouncements and those locations are where Councillors Mirau and Cunningham have made it clear that they not only support Mr. Brain's long term blue print, but are hopeful to remain on council to help put its themes to work.

On his website, Mr. Mirau makes frequent mention of some of the elements of the Hays plan as part of his current campaign material. Over the course of the last four years, whether through his comments in council, posts on his Facebook page or with his twitter outreach, the first term councillor has truly been one of the strongest supporters for the Mayor's initiatives, with the Councillor adopting many of the Hays 2.0 notes as some of his compass points for the future. 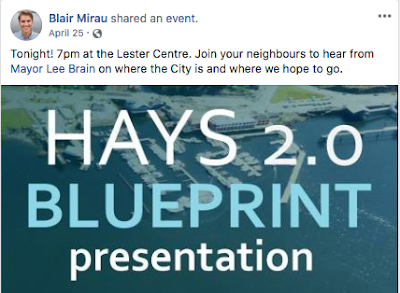 Councillor Cunningham's early launch to the campaign indicates a desire to see the current team sent back to council to continue the past work, over the course of this term, he too has had many positive things to say about the Hays plan and as he notes in this campaign, how the work of the last council has put down the foundation for the future. 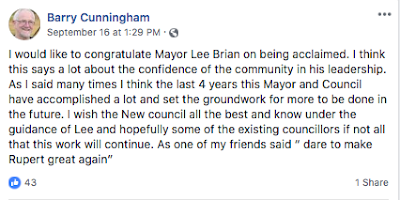 Of the newcomers to the political scene, Reid Skelton Morven appears to be a strong supporter of the Hays 2.0 themes, expressing not only his admiration for the project, but also his desire to be part of the team to help to deliver many of the plans elements to the community. 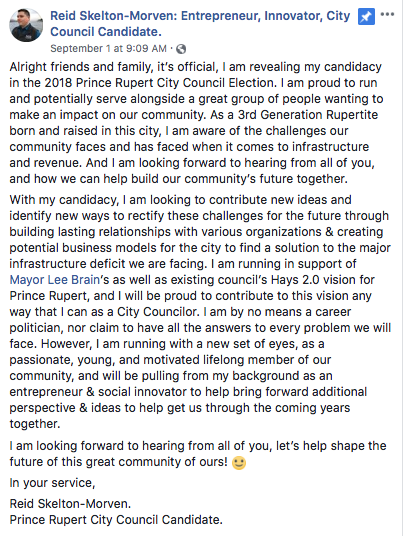 Of the remaining challengers for a seat, to read some of their position points does seem to indicate some leanings towards the direction that the Mayor wants to move the city towards.

Sarah Dantzer arrives on the municipal political scene from her work as Treasurer with Transition Prince Rupert, the community action group that was founded by Mayor Brain and others back in 2011. She has kept a fairly low profile in these early days of the Council campaign, however the Transition Prince Rupert themes do seem to mesh well with Hays 2.0 program, which would suggest that she would also be among those on Council with a desire to keep moving forward on the plan.

Contender Nick Adey doesn't mention the Hays 2.0 plan to this point in any of his early campaign talking points, however he does indicate that after many challenges, the city is heading in a positive direction. His comments also feature some of the themes on sustainability and transition that the Mayor has made popular through the last four years. 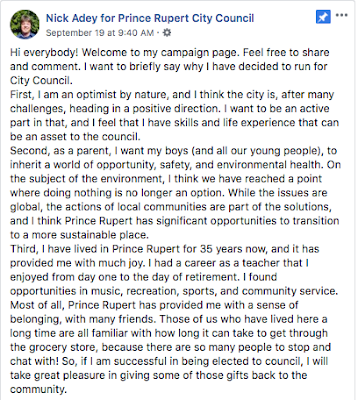 Charmayne Carlson has not to this point expanded on her focus in the campaign and her  ambitions for the city should she find success on October 20th. However, as a member of the City's Small Business Committee she and the other members of that group endorsed a number of the city's proposals and talking points of the last four years through a document called the Small Business Development Action Plan.

Ms Carlson and all the other candidates will have an opportunity to speak to the Prince Rupert of the next four years at the All  Candidates Forum of October 1st.

The night set to offer another opportunity for those running for office to once again pay public fealty to the Hays plan if they so desire.

With the Mayor also scheduled to be in attendance at that Lester Centre forum and many of the candidates appearing to be on the same page with him when it comes Hays 2.0 themes, that October 1st session and much of this campaign could at times make for an extension of the April campaign style rally that returned the document to prominence.

What will be worth watching from that October 1st event is whether any of the candidates for Council offer  up any contrary views, or ask for some clarification, or further details related to the Hays plan which will be the path that the city's politicians and senior staff members follow for the next four years.

As well, the candidates forum could let us see whether any of those that are seeking office plan to provide some oversight on how the city moves forward, or express some cautionary notes towards the feasibility of some elements of the Hays 2.0 elements and how the many ambitions of the plan can fit into the budget of a small city with a rather limited taxation base.

Regardless of how the vote tally shakes out after October 20th, for the most part from these early days of the campaign it would appear that the Mayor will be pleased when he turns left, or right in the Council chamber over the course of the next four year term.

With Mr Brain most likely to find that the crew mates aboard the good ship Rupert are all pulling the boat in the same direction, following a navigational chart called Hays 2.0.


For more notes from along the City Council campaign trail see our archive page here.


To return to the most recent blog posting of the day, click here.
Posted by . at 9:44 AM

Email ThisBlogThis!Share to TwitterShare to FacebookShare to Pinterest
Labels: Hays 2.0 as a campaign foundation