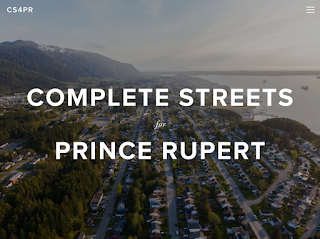 Complete Streets 4 Prince Rupert, the local advocacy group that has taken the lead in the community of pushing for road safety measures in the city has taken some interest in the upcoming civic election, using their online presence to get feedback from those seeking as seat on Prince Rupert City Council on October 20th.

The organization asked two questions of the Council hopefuls:

How important is it for you that the streets of Prince Rupert are safe for all road users?

If elected to council, what action(s), if any, would you take to make the streets of Prince Rupert safer, more accessible and more enjoyable for everyone.

So far, five of the eight candidates seeking office have provide their contributions to the forum, offering up a range of opinions on the theme, among the participants:

Councillor Blair Mirau who notes that it is the Ministry of Transportation which has authority over 2nd Avenue and McBride, but also looking towards downtown revitalization as an agent for safer streets in other areas of the downtown.


First, the Ministry of Transportation has authority over 2nd Ave and McBride which have proven to be the most unsafe streets, so the City must redouble its efforts to secure provincial investments in safety, for example, pedestrian activated lights. And second, I will advocate for the City to update our 2007 Official Community plan, including a downtown revitalization plan, to incorporate specific and targeted strategies that will ensure our streets become safer and more accessible for all users.


Nick Adey who is looking to join City Council as a new voice on civic issues, makes note of how the topic has come up in front of City Council in recent years and then offers up four elements that he would incorporate towards the goal of safer streets.


1. Take steps to improve visibility at night through lighting, and by encouraging the use of reflective clothing. (Many drivers know how difficult it is to see pedestrians in dark clothing on a rainy night).

2. Consider increasing the number of controlled intersections. I am thinking particularly of 2nd Ave., a four lane street with poor visibility at certain times of the year due to sunsets, parked cars, and night rain.

3. Support any efforts to educate drivers and pedestrians about the need for lower speeds, care, and higher visibility. This could include well placed signs, especially at key crosswalks.

4. I also think that if the city can follow through on plans to divert container truck traffic to a bypass route, some of the congestion and visibility problems may be eased.

Another new face seeking a City council seat is Sarah Dantzer, who notes that she would champion some of the Complete Streets initiatives with Council and seek grant opportunities to forward their goals.

as an elected official, I would engage supporters, encourage grant writing and champion the first stage of the Complete Streets Action Plan in council. Specifically, the first stage is to complete paths to and through 3rd Avenue West. As well, when Council is drafting the new Official Community Action Plan, safety, across and enjoyment for all modes of transportation will be one of my priorities.

Incumbent Gurvinder Randhawa calls on his experience as a driving instructor for some of his feedback as well he directs our attention towards the work of Council on the Redesign Prince Rupert plan as areas where safety concerns can be incorporated into planning.

The Redesign Prince Rupert plan completed by my City Council colleagues and myself envisions significant upgrades to our roads, crosswalks, and pedestrian routes. To bring this plan to reality, collaboration with other agencies is essential. We've been working with higher levels of government to obtain necessary approvals and engineering advice.

Councillor Wade Niesh who is also seeking a second term in office and has been an occasional participant on the theme of road safety during City council sessions, indicated in his contribution that if re-elected, he would continue to keep road safety as a concern for council to consider.

It is definitely important to have safe streets and I feel that if elected I will continue to advocate for improvements on highways such as what was recently announced. Also working with staff to make necessary improvements on city streets. I do feel that everyone needs to do their part in making streets safer so this needs to be attacked from all angles, both pedestrians and drivers.

The full review of their contributions to the Complete Streets topic can be found here.

Towards some of the goals of safer streets in the community, an update on the plans of the Ministry of highways was delivered to Prince Rupert City Council at last weeks Council session, with Mayor Lee Brain making note of the range of safety measures that will be put in place this fall and into the spring along Second Avenue West, with particular attention to the stretch of the busy thoroughfare that transits the City's downtown core and has been the scene of many of pedestrian/vehicle incidents of the last few years.

More of Council's past interest on the theme of road safety can be found as part of our Council Discussion Archive page here.

You can learn some more about some of the Complete Streets initiatives for Prince Rupert below:

For a look at what their project is all about see the Complete Streets 4 Prince Rupert website here.

Further items of interest related to the 2018 Municipal election campaign can be reviewed here.


To return to the most recent blog posting of the day, click here.
Posted by . at 9:08 AM