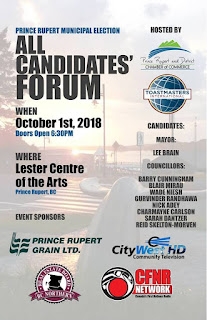 Voters in Prince Rupert will soon have their first opportunity to measure the eight candidates for public office in the October 20th municipal election.

That as the Prince Rupert and District Chamber of Commerce and Toastmasters join forces to present the All Candidates' Forum on Monday October 1st.

They will be joined on the Lester Centre stage by the four newcomers to the Prince Rupert political scene, as Nick Adey, Charmayne Carlson, Sarah Dantzer and Reid Skelton-Morven outline what they hope to bring towards civic governance for the next four years.

The City Council candidates will be asked to explore future issues and plans for the community, as well as to introduce themselves to the community in the public forum.

The Doors to the Lester Centre of the Arts will Open at 6:30


Also on the schedule for the night's event is the participation of Mayor Lee Brain, who while set to be acclaimed to office for another four years, will be also be involved in the October 1st Forum.

Though to this point, it's not exactly clear what role the hosts have in mind for him and whether Mr. Brain will be weighing in during the Council candidates segment, or if he will be delivering a pre-election update for the community as to what he would like to achieve over the course of his upcoming four years.

Among the plans for the evening is also to provide a chance for the Mayor and candidates to answer questions and address local concerns.

More updates on the upcoming forum will be shared through the Chamber of Commerce Facebook page.

For more notes related to the 2018 Municipal campaign see our archive page here.

To return to the most recent blog posting of the day, click here.
Posted by . at 3:20 PM