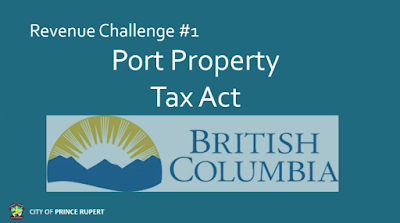 Fresh from the week of convention at UBCM, the theme of the City's ongoing quest for taxation fairness was a topic for the Mayor's short review of his five days in Whistler last week.

As we noted in our Council Timeline yesterday, the Mayor provided for a three point review of some of his main takeaways from the annual convention, exploring some of the conversation topics that he engaged in with other municipal leaders as well as provincial officials.

High on his discussion list with Finance Minister Carole James was to once again press upon the province of the importance for change to the structure of how the Port of Prince Rupert delivers financial compensation to the City through the Port Property Tax Act.

The Mayor noted in his address that he has been organizing a collection of other communities in the Greater Vancouver area to continue to keep that topic at the top of the list of concerns with the NDP government in Victoria.

We last heard about the work of the collective in May, when the Mayor was in the Lower Mainland to attend the Art of the Cities conference, with a side visit to address the Port cap issues.

The Mayor and City Council also made the Port Cap issues a key part of the budget discussions this year as well as major theme from recent Hays 2.0 update as well the City's Annual Report.


As part of the week at UBCM, the communities drafted and delivered a letter for the Finance Minister requesting a review of the Port Property Tax Act.

And while the Mayor noted in his comments for Council on Monday evening that he  could not speak for Minister James or officials with the Provincial government, his belief from the exchange was that the discussions were positive, with the Mayor anticipating some traction on the issue in the year ahead.

The Mayor's comments for Council can be viewed from the City's Video Archive starting at the minute 8:30 mark of the session broadcast.


You can review more of the notes from UBCM from our archive here.

Further notes on Monday's Council session can be reviewed here.

For a look at other City Council discussion topics see our Council Discussion archive here.


To return to the most recent blog posting of the day, click here.
Posted by . at 9:06 AM