They've been set up on Ridley Island for just over a year now, opening up for business in Prince Rupert in September of 2017 and in the course of the past 365 plus days, the Ray Mont Terminal facility has built on its early footprint to become another one of the key elements in shipping Canada's resources to global markets.

In this case the resource is grain products and to spread the word about their Prince Rupert option, the Montreal based export shipping company recently updated its website.

Included in the expanded flow of information is a video of the Prince Rupert operations to showcase how their new terminal is adding to the Port of Prince Rupert's range of shipping facilities while providing for increased job opportunities for the North Coast.


The Prince Rupert operation offers a state of the art container loading service, operating on a 24/7 basis, with full unit train capacity at the Ridley Island site.

The facility receiving arriving grain from Canada's prairies, and then loading container after container of the product for shipment through the Fairview Terminal facility on Prince Rupert's waterfront.

The system in place makes use of a vertical loading process that quickly turns around the arriving shipments of grain to get them on their way to world markets in as short a timeline as possible. 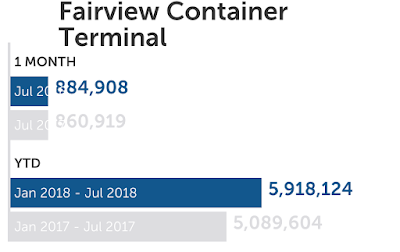 While grain shipments did suffer through much of the early part of the year owing to a number of issues with the CN Rail transportation system, the railway vowed at the time to get back on track for customers taking a number of steps in recent months to achieve those ambitions.

CN Rail has already started an ambitious infrastructure expansion program on the railway between Prince Rupert and Prince George, as well as adding to their employment levels and amount of rolling stock, the prospect of growing production numbers could be on the horizon for Ray-Mont.

You can review some of our previous notes on the Ray Mont facility from our archive page here.