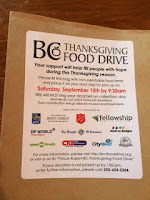 The bags may have been heavy, but those making the rounds of Prince Rupert and area on Sunday collecting them weren't complaining, as North Coast residents filled their grocery bags to the brim providing for a number of goods for the Salvation Army's Thanksgiving plans and Food Bank shelves.

As we outlined on the blog on Friday, a number of churches and organizations in the community had come together for the BC Thanksgiving Food Drive operating out of the Church of Latter Day Saints on Prince George Street which served as Food Drive central, with organizers dispatching collection teams to all points of the city.

Earlier last week, residents of the city had received a large paper bag in their mailbox, asking for donations for this years program and as the day came to an end, the North coast had answered the call for assistance.

When the final tally was done over 3,000 kilo grams or 6,700 pounds of canned or packaged goods had been donated, a number which smashed the previous record of 5,200 pounds of 2015.

The annual call for donations comes as the Salvation Army heads into its busiest stretch of delivering assistance to the community, with Thanksgiving and Christmas programs soon to launch.

Those still in a giving mood can contact the Salvation Army at 250-624-6180 to learn more about how they can lend a hand.

This weekend heralds yet another popular Prince Rupert event and one that will do its part for the local organization that does much work in the community.

The Annual Harley Riders annual Toy Run takes place through the streets of the city this Saturday, September 22nd with riders set to depart the Salvation Army at Grenville Court at 1PM.

Saturday's event, the 37th ride through the city, includes the always popular Poker Run with this years celebratory dance set for the Seal Cove Neighbourhood Pub at 8PM.

You can review more notes on that event from our blog notes of September 11th.

For more community notes from the region see our archive page here.


To return to the most recent blog posting of the day, click here.
Posted by . at 11:47 AM