A stretch of Second Avenue West through the city's downtown core is about to get some significant attention from the Ministry of Transportation, with a number of safety issues to be addressed over the course of the next few months, with some larger concerns to be tackled in 2019.

Mayor Lee Brain provided the thumbnail guide to the work ahead at Monday's Prince Rupert City Council session, noting that the officials had heard the community loud and clear when it comes to concerns for an area that has seen a number of pedestrian/motor vehicle incidents in recent years.

First on the to do list for the Transportation and Highways Ministry will be upgrades to 89 street lights converting the lighting from conventional bulbs to LED, which will provide for more effective light in low light conditions. That work will take place on McBride and Second Avenue.

As well, the work ahead this fall will see the installation of pedestrian crossing countdown timers and audible at all intersections and the replacement of all street name signs on signal poles and providing for more durable long line painting along the arterial so it does not rub out as easily and will last longer.

Later this fall, or in the spring of 2019, the Ministry will also be reconfiguring the Second Avenue and Third Street Crosswalks removing the downhill crosswalk and improving signage at the uphill crosswalk, which the Mayor observed was the Chevron crosswalk.

As well they will be completing a design study for the McBride Street/Second Avenue intersection that will look to complete designs to improve the intersection, which could include a roundabout and signalization.

The Mayor noted that any questions on those projects should be addressed to Darrell Gunn who is the District manager, based out of Terrace.


The issue of road safety along Second Avenue West has been a topic of note more than a few times for Prince Rupert Council in recent years.

Mr. Gunn appeared in front of Council last November to provide an update on a number of Transportation issues, at that time he heard more of the concerns of Council when it comes to Second Avenue.

That interest in road safety has been spurred on by the growing number of incidents that have been recorded on the busy highway through the city.

Accounts of many of those encounters can be found from our Emergency Services Archive pages through the last few years.

Last December, the Mayor observed for Council that Mr. Gunn had committed to meeting with City staff to explore further the concerns that Council had about the city's main thoroughfare.

You can review the Mayor's notes on the downtown plans from the city's video archive starting at the six minute, thirty second minute mark. 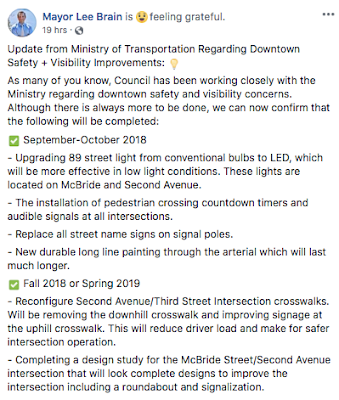 Email ThisBlogThis!Share to TwitterShare to FacebookShare to Pinterest
Labels: Highways to begin work on safety issues for Second Ave West