North Coast residents to do the Fox Trot this Sunday 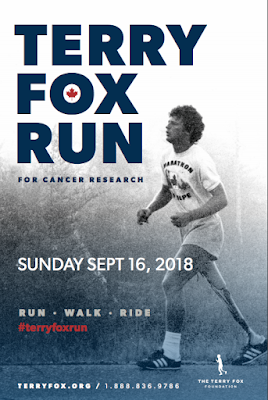 Canada's annual celebration of the legacy of Terry Fox takes place this Sunday from coast to coast to coast and far beyond and locally, those in the Prince Rupert will be taking to the streets from the starting line at Northern Savings Credit Union.

The Terry Fox Run which raises awareness and funds for the Fight Against Cancer has a 1 PM start Sunday afternoon in Prince Rupert, with registration at Northern Savings to start at the Noon hour.

Participants can choose a 3 kilometre or 7.2 kilometre route that they can walk, bike or run at whatever pace they prefer.

The day features Door prizes at the completion of the run back at Northern Savings as well as a free photo booth session and complimentary snacks.

Last year Prince Rupert raised over 26,000 dollars as part of the day's event.

One long time contributor to the National totals has been former Prince Rupert resident Jim Terrion, who was recently back in town to make the rounds of neighbourhoods across the city.

Now living in Prince George, Mr. Terrion has raised over 730,000 dollars as part of the Terry Fox run over the course of the last 27 years.

His efforts have been recognized by both Prince Rupert and Prince George, with MLA Jennifer Rice often saluting his determination in the Legislature over the years.

Updates on The 2018 Terry Fox run can be found from the Facebook event page created for Sunday's run.

You can learn more about the national Terry Fox Run as well as the Terry Fox Foundation from their website here.

The Terry Fox Run page for the Prince Rupert run can be reviewed here.

Those living in other communities across the Northwest and on Haida Gwaii can use the Find your run feature of the Terry Fox Run website.

For more items of note related to Community events on the North Coast see our archive page here.

To return to the most recent blog posting of the day, click here.
Posted by . at 10:53 AM