The nominations lists have been finalized and for School District 52 the 2018 election campaign will feature thirteen candidates for office from both the urban Prince Rupert nomination list and that of the rural voting area which is for the most part made up of voters in Port Edward.

On Monday, SD52 posted the official list of candidates for office previously noted on the City of Prince Rupert website on Friday. 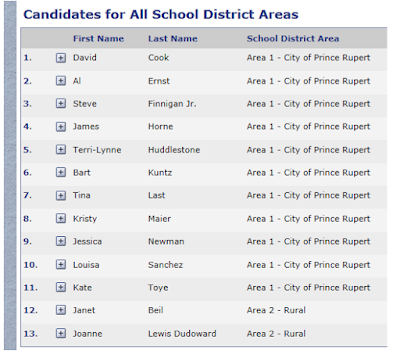 Six representatives will be elected in the Prince Rupert election, with one rural seat to be filled as well as part of the municipal election vote.

As the campaign period moves forward we'll take a look at some of the issues that may help to shape the debate on the way to the October 20th vote.

For further notes on the 2018 campaign both for School District and Municipal office see our election archive page here.

Notes on School District issues can be found through our Education archive page.

To return to the most recent blog posting of the day, click here.
Posted by . at 12:06 PM

Email ThisBlogThis!Share to TwitterShare to FacebookShare to Pinterest
Labels: SD52 candidates for October 20th Board election