For the most part, the discussion and focus on the upcoming fall vote to determine if British Columbia will adopt a proportional representation electoral system or stay with the current first past the post system, all but dropped off the radar over the summer.

Interest in the themes of debate pushed to the side as British Columbians enjoyed their summer vacations, or in the case of many communities dealt with the more immediate concerns related to the raging wildfires that marked much of our news through August and in particular threatened a number of towns and villages across the Northwest.

This week however came a reminder that it's still Game On, when it comes to the vote, with Elections BC delivering the notice to residents to make sure that they are registered for the mail in voting process set to begin from October 22nd to November 30th. 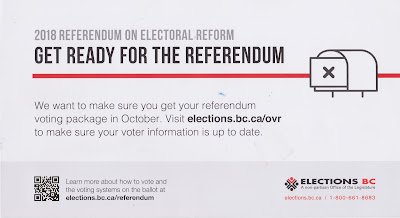 Of course, it wouldn't be British Columbia politics without a little bit of drama, and one unforeseen situation has just popped up this week

As we noted on the blog on Tuesday, the potential ahead for a mail interruption is now upon us, something that would have a pretty important impact on the referendum planning.

On Tuesday, the union representing Canada Post's workforce released the results of a strike vote taken among the membership earlier this month, with the union receiving a strong mandate of the membership to take labour action if necessary.

Canada Post could also lock out its employees should things not move forward at the negotiating table.

All of which could bring a delay in the vote on how we should cast our ballots in future elections, though it also would offer more time for the two sides of the debate to make their case to the voters.

As it is, the push to get each message out should pick up in the next few weeks, as both the voting period arrives and our provincial politicians return from their summer travels and constituency visits to get back to work in Victoria.

With little to report on from the referendum information trail over the summer, our archive is still fairly heavy in notes from the early summer period, as the debate renews, we will update our notes here.

For more notes of interest out of Victoria see our Legislature archive page here.

A wider overview of developments from the provincial capital can be explored through our political blog D'Arcy McGee,