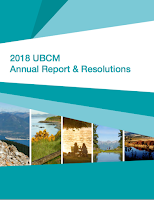 With the delegates to the 2018 UBCM convention now all back in their home constituencies, the province's umbrella body for municipal government has had a chance to put the finishing touches on their review of the volume of resolutions considered at this years event.

In the lead up to this years convention, Northwest and Northern BC communities brought a wide range of issues to the call for resolutions and from the convention wrap up review, we can now see what success that they had when it came to their suggested discussion points for the Whistler gathering.

As we noted on Friday, Prince Rupert had submitted one resolution for UBCM this year, which put the focus on the state of the province's fishery and the need for municipal support to raise the issues with provincial and federal officials.

The resolution which was first proposed by Councillor Joy Thorkelson to Prince Rupert Council earlier this year, was endorsed during the resolution process at the convention, with delegates offering a slight amendment to the language.

When it comes to the review of the volume of resolutions from around the Northwest, for the most part communities found much success with their discussion themes, with the scorecard for 2018 looking as follows:

B6 -- Search and Rescue Funding  -- Endorsed

B24 -- Underfunding of Public Libraries -- Endorsed with an amendment

B107 -- Downloading of Wildfire Mitigation Costs and Responsibility -- Endorsed

B83 -- Elected Official Disqualification --  Endorsed with an amendment

(Therefore be it resolved that UBCM lobby the provincial government to implement legislation to require that an elected local government official be disqualified from office upon conviction of a serious criminal offense, not including convictions related to non- violent acts of civil disobedience;

And be it further resolved that an elected local government official be required to take a paid leave of absence from office upon Crown approval of charges until the court process is complete. )

All of the communities of the Northwest and Haida Gwaii are members of the North Central Locagl Government Association and the political body has delivered seven resolutions for consideration at the convention.

The full overview of all of the Resolutions introduced at the UBCM in Whistler can be reviewed here.

B28 -- EPR for Agriculture Plastics -- Endorsed


The full overview of all of the Resolutions introduced at the UBCM in Whistler can be reviewed here.


More notes related to convention week can be examined further from our archive page.


To return to the most recent blog posting of the day, click here.
Posted by . at 11:56 AM