More changes to the Prince Rupert media landscape, with the departure of the Northern View's Keili Bartlett

After a tour of duty just short of one year on the North Coast, Northern View reporter Keili Bartlett is following the GPS to points south, a booked passage on BC Ferries destined to take her to her new career path, joining the staff of Black Press in Victoria.

Ms. Bartlett posted her farewell to the community to the weekly paper's website on Thursday, recounting some of the news highlights of her time in the city and some of the stories that she had covered during the course of her stay.

In among the Heart of the City stories, Podcast work and other feature stories, updates on City Council and the city's crime beat carried her byline on occasion.

The graduate of the University of Kings College in Halifax arrived in town last fall, taking over the duties of former Northern View reporter Joseph Jack, who had moved to Jennifer Rice's office to become one of her constituency assistants.

Her departure makes for the second change to the media scene in Prince Rupert of the month, last week we took note of the departure of CFTK's Helena Skrinjar in August, something which has made for a little less coverage of Prince Rupert and its stories on the television station this month,

CFTK has been on the search for a replacement since Ms. Skrinjar left town, but so far, no announcements have been made as to that opening.

Like the TV station, the Northern View has posted their multi-media reporter position far and wide across its network of job opportunity portals.

With a busy news cycle upon us with the arrival of fall and the increase in stories that it brings, along with a to do list that is made a little more interesting by the upcoming municipal election process, one imagines that the local news service will be looking to fill the empty desk as soon as possible.

Then again, as Ms. Bartlett has noted on her twitter feed through the week, leaving town may not be quite as easy as one would think, with her story on the mechanical  troubles and delays of the Northern Expedition hitting close to home providing for a potential shift in her own travel agenda.

And who knows, maybe we haven't seen her last byline for the north just yet ... 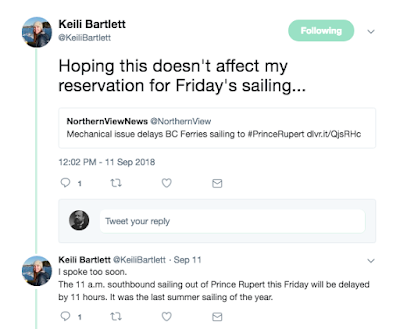 As she awaits her departure from the Fairview Bay Ferry terminal, she may be able to source out one more story for her old paper, a first person narrative as to how the ongoing mechanical issues can have an impact on the travel plans of customers on the North Coast,  along with one reporter looking to head to her new job.

For more items of note related to media moves across the Northwest see our archive page here.


To return to the most recent blog posting of the day, click here.
Posted by . at 9:24 AM

Email ThisBlogThis!Share to TwitterShare to FacebookShare to Pinterest
Labels: Weekly paper on search for new reporter with departure of Keili Bartlet