The local group looking to add some safety features for downtown streets provided a look at a few of their options for Prince Rupert City Council on Monday evening, as Complete Streets for Prince Rupert's Chris Lightfoot took the Council members through a few of the concepts that the group would like to try in the city's downtown area.

However, as the middle option of Second Avenue West is a provincial highway, the group noted that the Ministry of Transportation indicated that they were not inclined to support their request for the trial project on that roadway.

That leaves the two options on streets under the jurisdiction of the City or Prince Rupert up for consideration for the program. 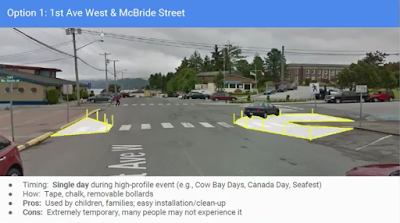 Lightfoot explained that the project evaluation period would take place before and after the placement of the pedestrian measures tracking such things as time it takes for pedestrians to cross, speed of vehicles and feed back from those crossing at the intersection.


Funding would come through grants and donations that Complete Streets for Prince Rupert would approach the community for.

The group would also consult with the City as to how they would approach the program should their quest be approved, as well as guidelines for criteria to determine success.

While the planned extensions would be temporary in nature, the organization highlighted some of the permanent options that the City could consider. 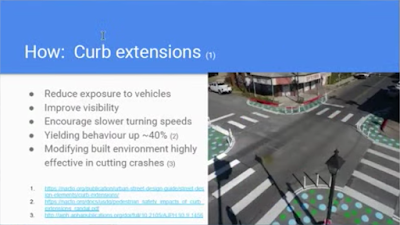 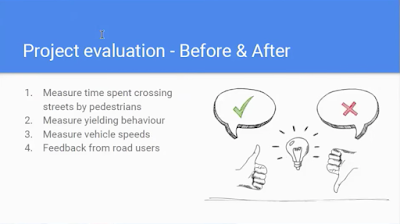 When it came to questions, Council members weighed in with praise,  a few concerns and a number of observations on the proposed initiative.

Councillor Randhawa inquired as to who would be making for the set up and take down, he was advised if it were a short term one day project the Complete Streets program would take care of it, but should it be a more permanent set up and for a longer period of time they would defer to the City for installation.

Councillor Kinney inquired if the organization had contact the RCMP regarding to the project,  and while Mr. Lightfoot indicated he had not formally approached them he was of the belief that they would have some feedback on the proposal. Mr. Kinney followed up with a comment related to his concerns over the Second Avenue West design.

Councillor Cunningham offered up his support to the concept of bump outs, but expressed some concern over the nature of the plastic bollards as opposed to a more permanent feature which would provide more protection for pedestrians.

Mr. Cunningham also noted that with the number of incidents in recent months something has to be done to try and increase the safety in the downtown area. He also, suggested that some pressure be put on the Traffic Detachment in Terrace to provide assistance to the Prince Rupert detachment in a more aggressive approach to road infractions.

Councillor Niesh echoed the concern of Councillor Cunningham in the need to have something done, he outlined how the idea of using paint probably wouldn't be a good choice considering the weather here, but did offer support to the concept of bump outs and other options.

Councillor Thorkelson made note of her experience on the success of bollards that she had seen in Portland, Oregon, she noted that some of the concepts had been part of the ReDesign Rupert program a few years back. She also inquired of the City Manager as to who has authority over Second Avenue West, with Mr. Long noting that it is a provincial highway and they have the authority to accept or reject any options.

Councillor Mirau suggested that Third Avenue would be the best option for the test period, and asked that Mr. Lightfoot make his presentation to staff to see if the concept could move forward.

You can review his presentation to Council from the City's Video Archive, it starts at the nine minute mark.

More items of interest from Tuesday's City Council can be found from our Council Timeline feature and archive of the February 13th session.

While a look at past Discussion topics from City Hall can be found on our Council Discussion page.

To return to the most recent blog posting of the day, click here.
Posted by . at 9:28 AM