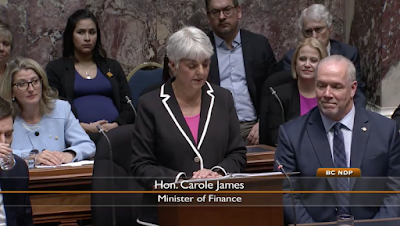 An event not seen in Victoria for some 17 years took place on Tuesday afternoon, as Finance Minister Carol James delivered the first full budget to the Legislature for an NDP government, outlining the much anticipated blue print for John Horgan's NDP collective in the House.

Ms. James provided for  the talking points for the current session of the Legislature and beyond, as long as the NDP's minority government continues to have the support of the House and by that of course, we mean the support of the three member Green Caucus.

The document offered up much to keep Mr. Weaver and his Green MLA's aboard the Horgan train for now,  delivering on many of the themes that had been hinted towards one week ago in the Speech from the Throne, with the focus of the financial planning directed towards the twin concerns of housing and child care.

While the NDP's much proclaimed plans for a ten dollar a day, day care program has been left to the sidelines for the moment, there were other initiatives announced that  will redirect funding that will benefit working parents who may require assistance and options for their children's care. 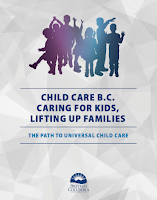 The Child Care program was introduced as a path towards Universal Child Care and the features the NDP have stressed from it highlight an inclusive structure, that is accessible to everyone, one that is culturally based and available when and where families may need it.  The NDP notes that the plan is built to have long term funding and will offer better links between child care and the school system.

The Child Care plans will look to improve access for all children, with the NDP guided by its commitment towards the United Nations Declaration of the Rights of Indigenous People will also develop an Indigenous led Child Care program, with the Head Start Program to be the initial area of approach.

The first year of the program will see a priority given to infant and toddler care with a range of fee reductions announced and a new affordable child care benefit introduced which has a scale of benefits introduced according to family income.

Recruitment and training of professional care givers and help for existing child care providers to become licensed is a key element of the NDP plans to build partnerships and delivering care.

A snap shot of the Child Care initiative can be reviewed below (click to enlarge). 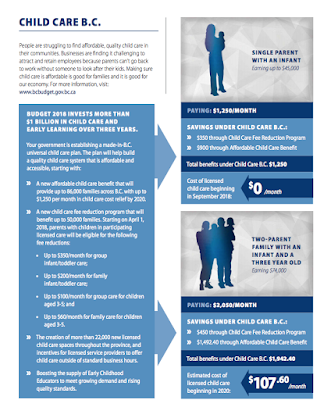 More on the Child Care program is available here. 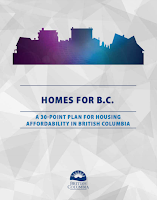 Steps towards more affordable Housing for British Columbia made for the other portion of the two major Budget Highlights of the day,  featuring the introduction of the NDP government's 30 point plan for a fairer housing market.

Towards their goals on housing the NDP is creating a new speculation tax on what the NDP refers to as distortions in the British Columbia housing market.

As well, there will be an increase to and expansion of the foreign buyers tax, a move designed to have foreign buyers make more of a contribution to the life that they will enjoy when they move to the province.

The government will also look to stabilize the housing market by bringing in an increase to the province's property transfer tax and to the school tax on the wealthiest homeowners who buy or own homes valued at more than 3 million dollars.

More transparency and disclosure will also be part of a new housing regimen.

The Province will also review the Homeowner Grant program to look to provide fairness for renters as well as home owners. The NDP will also look to work with the Federal Government to combat money laundering, tax evasion and tax avoidance concerns.

When it comes to new affordable housing units in BC, the NDP government announced plans to invest more than 6 billion dollars over ten years, those plans will include housing for Seniors, more student housing, as well as housing options for women fleeing violence.

The provincial government will also partner with Indigenous communities by investing 548 million dollars over ten years for social housing needs. 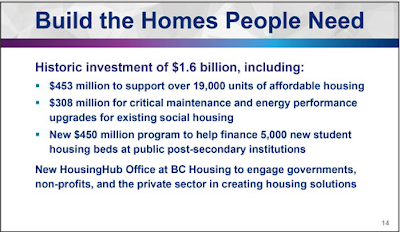 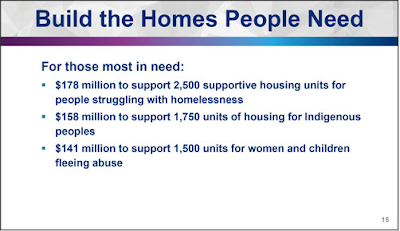 The housing focus also will look to build 14,000 rental units for what the government calls the missing middle, with close to 400 million in the next three years, and 1.8 billion over ten years to be allocated towards middle class housing issues.

Supportive housing and homes for those that are homeless will also make for part of the housing plan roll out, with the NDP government taking note of current plans for new modular housing options in both Terrace and Prince Rupert, as well as other British Columbia communities.

The Housing initiatives will be delivered through a partnership approach called the Housing Hub, which is designed to empower local governments towards housing programs, with a loosening of the rules when it comes to how municipalities like Prince Rupert can make use the Hotel Tax as one element of the plan. 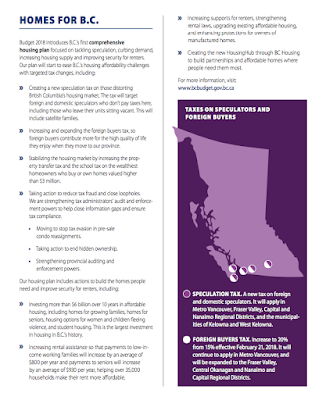 More on the Housing program is available here.

Education also made for a key element of the NDP's first budget, with the government announcing an expanded investment  in funding to hire additional teachers, which will bring the total number of new hires to over 3,700 under the Classroom enhancement Fund that was introduced in the fall of last year.

School Districts across the province will also see an additional 2 billion dollars over three years put towards maintaining, replacing, renovating or expanding on schools across BC.

That program will be of significant interest for SD52 officials who are still awaiting word from the Ministry of Education for their quest for a replacement for the Prince Rupert Middle School.

There will be an increase in Indigenous skills training and the creation of a new Indigenous law program, as well the NDP government will also expand and enhance on their supports for newcomers to Canada.

Health Care provisions made for another segment of the Budget Day overview, the flagship initiative is the eventual elimination of MSP Premiums to develop a fairer tax system.

Effective January 1st 2020, all MSP premiums will be eliminated, with the lost revenue to be recovered through an Employee Health Tax, which will see a scale of payroll taxes implemented according to the value of a company's payroll levels.

Plans for new hospitals were also recounted by the Finance Minister, including the recent announcement for a replacement of Mills Memorial Hospital in Terrace, part of a projected 3.1 billion in capital spending in the health sector over the next three years.

An expansion of Pharmacare coverage for 240,000 B.C. families was also announced, while the shortage of family doctors in the province was also acknowledged in the Budget document, with another 150 million over three years to help residents of the province to access team based primary health care. 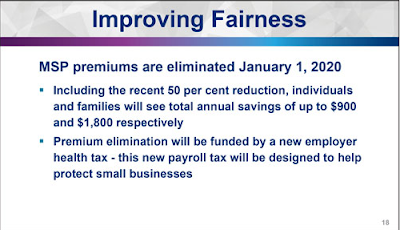 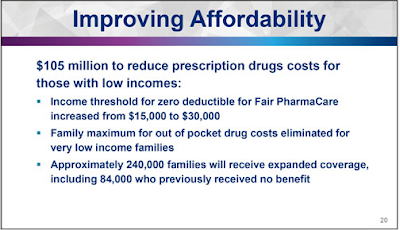 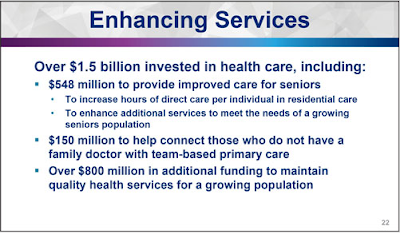 Some other areas where the Government is making changes include Transportation, with BC Ferries receiving some significant attention from Tuesday's Budget. 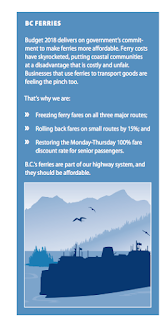 Calling the ferry service part of the highway system, the NDP government introduced plans to freeze while other routes including the service on the North Coast will see fare reductions of 15 per cent.
fares on the three largest routes of the service,

The government will also restore the Monday to Thursday 100 percent fare discount for senior passengers.

Other Transportation initiatives will include 214 million for the buss pass or transportation supplement for over 100,000 British Columbia residents receiving disability assistance.

The NDP also outlined how they plan to approach some of the key transportation issues in the heavily populated Lower Mainland area, with a replacement for the Patullo Bridge high among their notes.

The Province also has expanded on some of its goals towards reconciliation with Indigenous peoples in British Columbia,  with 201 million dollars over three years to be put towards Indigenous housing, Skills Training programs and support for Friendship Centres, as well another 50 million dollars will be allocated this year towards the revitalization of Indigenous languages.

The NDP government also outlined it's plans towards adopting the recommendations from the United Nations Declaration of Rights of Indigenous Peoples. 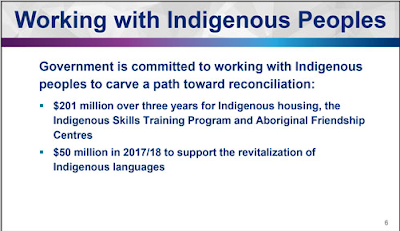 As a nod towards their current partners in the Legislature of the Green Party also made for some of Ms. James notes on the day, with a number of initiatives on reducing greenhouse gas emissions, increasing the carbon tax rate and investing in a number of green programs all outlined as part of the NDP government's plans for the years to come.

Among those plans was a hint towards the introduction of a road map towards supporting the transition to a low carbon future for British Columbia.

Her presentation to the House can be viewed through the Legislature Chamber Video for Tuesday afternoon starting at the 1:30 PM mark.

Ms. James also provided a Technical Briefing of her Financial plan, you can review that presentation below:


A full overview of the NDP's first budget from a range of media sources and opinion shapers can be reviewed from our political portal D'Arcy McGee and our Victoria Viewpoints feature for Tuesday.

More notes related to Northwest representation in the Legislature can be found below:


To return to the most recent blog posting of the day, click here.
Posted by . at 9:08 AM

Email ThisBlogThis!Share to TwitterShare to FacebookShare to Pinterest
Labels: NDP Budget for 2018