Prince Rupert residents will have two opportunities to weigh in with their thoughts on this years City of Prince Rupert budget, with the two regular City Council sessions of March designated as the host for opportunities for public comment for this year.

The path towards those consultations was put forward this week, when the City's Chief Financial Officer Corrine Bomben, provided for the 2018 Budget Presentation for Council as part of Monday's Regular Council session.

Ms Bomben took City Council through the process for Budget development, making use of a short slide show presentation that touched on a number of themes.

The first was a look at some of the service challenges that the City faces with the Digby Island Ferry flagged as one of the challenges faced by the City, with Prince Rupert residents subsidizing the airport Ferry to one million dollars. 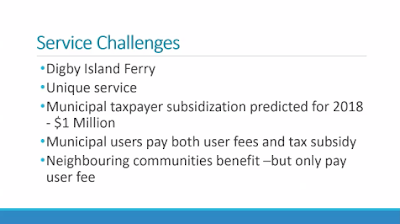 As well the CFO made note of some of the financial elements that provide for challenges, including the Provincial Incentive Program, and the concerns of the city over the Provincial offsets program that is in place and the nature of the Taxation Burden Transfer that the city faces from them. 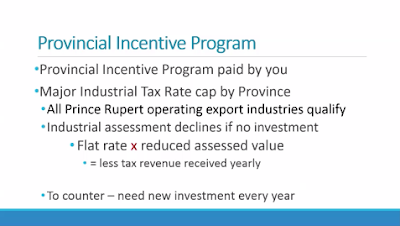 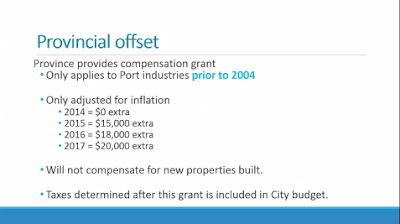 The review of the financial themes and number crunching took a slight political detour during this portion of the presentation, as the CFO drew attention to some ongoing concerns of the city related to those tax caps that have been put in place by the province.

Ms. Bomben added that the tax cap that the Provincial has legislated has been an ongoing issue for the city and City Council for a number of years now.

As part of her commentary, the CFO noted that the City had hoped that with a change of government there would be some relief, then firing what could be considered a political salvo towards Premier Horgan and North Coast MLA Rice.

"The problem has been that the province has placed a limit on the property tax rate that the city can use to collect taxes, Council has tried  for years to make the province aware of the unintended consequence of this legislation. There was hopes that the new government would bring some relief, however it has only been a change of actors and not the story"

Ms. Bomben then relayed the wish of Council that residents should contact MLA Jennifer Rice to express their concerns: 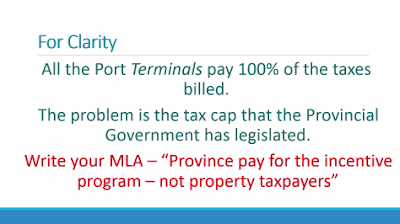 When it comes to Budget requirements, the CFO outlined a few of the financial expenditures ahead for this year, included on the list were such items as the replacement of the public works building on Wantage Road, the upgrade of the RCMP cell block, as well as completion of phase one and the start of phase two of the water supply projects.

There is also a requirement for an upgrade to the aquatic centre, work on the west berm expansion of the landfill and the replacement of the city's solid waste trucks.

The City will need to pay contractual wage increases for the city workforce as well as for the RCMP, another expense item is an increase by 300,00 dollars in the payment that the city makes to Port Edward as part of the Ridley Island Tax Sharing agreement, that will make for a total payment to the District of 900,000 for this year. 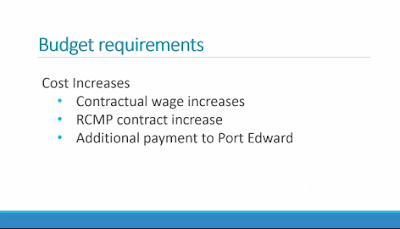 The CFO noted that those expenses have been offset by taxes from expansions and new builds and experience savings, that has resulted in a balanced budget, with no planned increase to the residential mill rate.

As part of her presentation Ms. Bomben also provided an explanation of what the mill rate is and how it is applied towards property taxes for residents of the community. 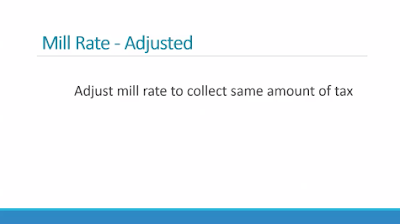 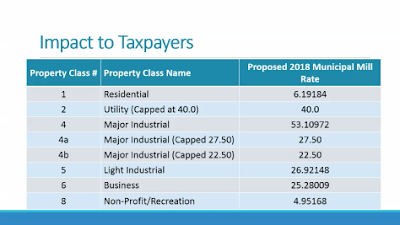 For those that look at their tax bill and find the lengthy list of additional charges confusing the CFO also outlined the range of other taxes the City collects as an agent on behalf of other taxing authorities, noting that the City of Prince Rupert only has control over two elements of the levies that are put in place. 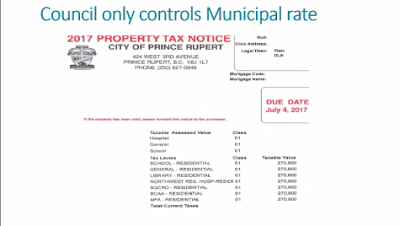 Of note for the public will be the upcoming revision for the BC Assessment roll which will be announced on March 31st, that revision could result in changes to the tax rate and may impact on the proposed mill rate. 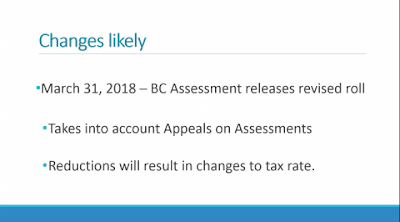 When it comes to property taxes for this year, to this point, while there don't appear to be any plans to reduce the tax burden on residents. However for those looking for the silver lining in the financial review, there currently is no plan to increase the amount of tax that is in place. 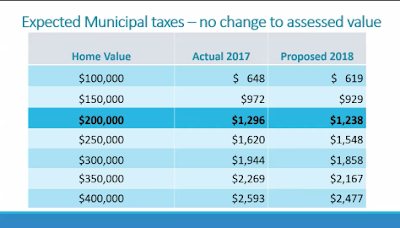 As for questions from Council from Monday, Councillor Randhawa asked about how the property tax process was evaluated and what factors the Finance Department takes note of as they prepare the Budget from year to year. She observed that the City can only tax on property and does not have the authority to tax based on income.

Councillor Cunningham, asked for some clarification  and offered up some observations when it comes to the major industrial category of taxation and the nature of the cap system that is in place related to that element of the budget process.

He observed how the cap system that is in place from the province has an impact on how the city can distribute the level of taxation to the three main taxing areas of residential, commercial and industrial.

The CFO provided some further background on how the city approaches those taxation elements in order to provide for a balanced budget.

Councillor Mirau offered his thanks to City Staff for their hard work on delivering the budget recommendations and then inquired as to the timeline ahead for the Budget.

Ms. Bomben outlined that the two public consultations would be taking place in March and that the Finance Department would need to have the Tax Bylaw and Five Year Financial plan in place by April 24th, she also added that the BC Assessment results of late march will provide the final glimpse for the City as to what the mill rate will be set at.

Councillor Niesh added his thanks to Ms. Bomben and City staff for their work on the budget process and then reminded the public that if they have any issues that they want to have addressed in the budget they need to bring them to the attention of Council, suggesting that they make use of the two public consultation sessions set for March.

The City will host two public consultation sessions on the Budget in March during the March 12th and 25 Regular Council sessions, those sessions will also be streamed through the city's website and by CityWest Community television.

You can review the full presentation to Council from the City's Video Archive of the Monday night City Council Session, Ms. Bomben delivers her financial preview at the 8 minute mark of the meeting.

As the city moves through the Budget process, we will add any items of note to our archive page on City Budget issues, which you can find here.

A review of past Discussion topics and other notes related to Prince Rupert City Council can be found as part of Council Discussion Archive.

To return to the most recent blog posting of the day, click here.
Posted by . at 11:35 AM