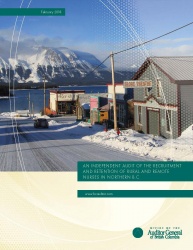 Thursday's release of a report from the Auditor General of British Columbia has put the spotlight on the ongoing troubles of recruitment for Northern Health, with vacancy rates in Terrace and Prince Rupert among some of the areas of note from Auditor General Carol Bellringer.

The data collected as of April of 2017 noted that Northern Health was short 121 Registered Nurses in its rural and remote workforce a vacancy rate of 15 per cent, with Nurse Practitioner positions holding an even higher level of vacancy at 25 percent.

The introduction to the Report also highlighted seven health care areas that have significant staffing shortages.

A chart provided as part of the report highlights the situation in Prince Rupert, with the shortage of Registered Nurses showing a deficit of eighteen total RN's, placing it third highest on the vacancy list in the Northern Health Service Region.

The AG Report noted that the impact of such levels of staff shortages included unmet patient needs, patient safety risks, an increasing nurse burnout rate and higher costs to name a few.

The reasons for the shortages reviewed included many that were out of the control of the Northern Health Human Resources and Recruitment offices, those being weather, the isolated nature of many communities and limited amenities in those communities.

But when it comes to areas of concern that are under the control of Northern Health, the AG Report provided for a few areas of note for further action by Northern Health.

Those include the development of interprofessional teams, better training for nurse managers and an expansion of Registered Nurse training in Northern British Columbia.

The Report did take note of some improvements in implementation of better practices, including a focus on recruitment and retention, including such elements as an employee referral program, staff recognition programs, multiple targeted marketing campaigns and student placement/clinical rotation programs for rural and remote locations.

Management issues from region to region also factored high in the reason for some of the shortages across Northern British Columbia.

Management also has a significant impact. RNs described cases where they chose one community over another because the hiring manager was quick and attentive throughout the recruitment process. They also told us about RNs who left due to poor management.

An information graphic provided a snapshot of the majority of the Report findings and the impact of the current situation on rural and remote communities. 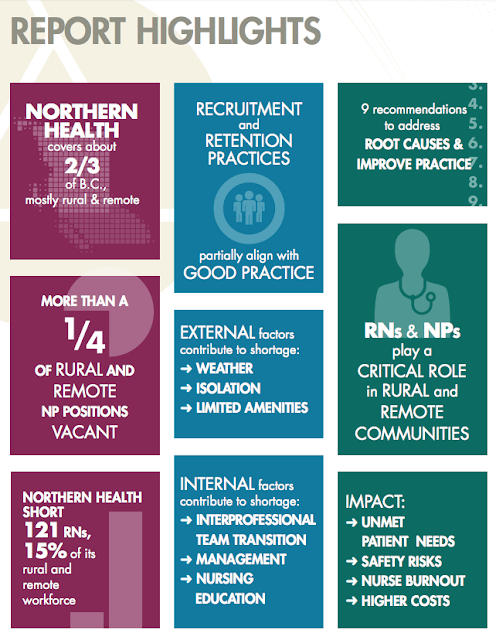 The Report included Nine Recommendations for Action to serve as a blue print for Northern Health to improve on their service level and the ability to attract and retain staff members.

Among some of the themes that were explored in the document, the need for Northern Health to work with communities towards development of temporary and affordable housing, the continued development of new recruitment and retention programs, development and implementation of a standard orientation process for RN's that can be adapted to meet the needs of diverse sites.

The Full scope of the nine recommendations can be reviewed below:
(click to enlarge) 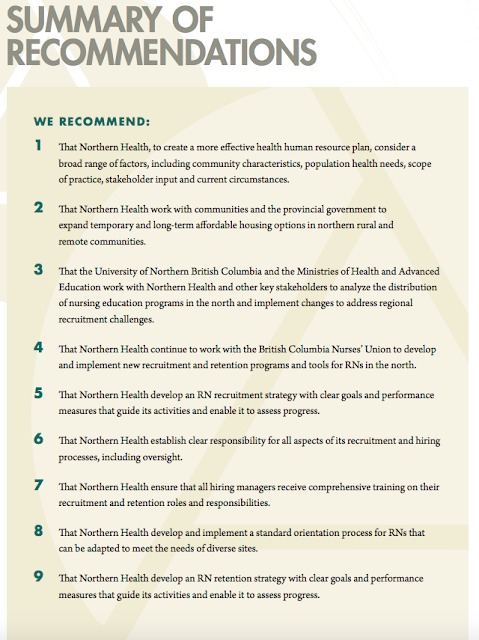 The sixty seven page document also includes responses from Northern Health and notations on areas where the Healthy Authority has addressed some of the issues. The report also takes note of some of the areas where Northern Health has been proactive in their quest to improve on staffing levels and deliver a shift in management style.


You can review the full report here.

A video presentation of the Report was also released by the Auditor General's office, which you can view below:

“We recognize that we need practical solutions and strategies and strong leadership to address the unique recruitment and retention challenges faced by largely rural and remote regions such as ours,” ... “We also recognize the need for, and appreciate, the relationships we have fostered with communities, academic institutions, our health care unions and the provincial government that contribute to our recruitment successes.” -- Northern Health Board Chair Colleen Nyce

Other items of note from a February Board meeting hosted by Northern Health also provided for updates on quality improvements in a number of patient care programs and a Budget forecast that noted that the Health Authority would be in balanced position at the end of the 2017/18 fiscal year.

For more items of note related to Northern Health see our archive page .


To return to the most recent blog posting of the day, click here.
Posted by . at 9:29 AM

Email ThisBlogThis!Share to TwitterShare to FacebookShare to Pinterest
Labels: AG Report on Nursing in Northern BC