Fans of theatre had much to celebrate last week, as over 75 enthusiastic theatre students and their teachers shared three nights on the stage, delivering strong performances in six presentations.

Arriving in town for the four day run of the Northwest Zones were students from Hazelton, Smithers and Terrace who all  brought their theatrical skills to the North Coast's home of theatrical productions of the Lester Centre of the Arts.

The Zones competition made for more of a reunion than any kind of competition, as students and teachers reconnected from past years, shared experiences from the year and learned more about their craft from each other over the course of  the four days and nights in Prince Rupert.

Along the way, the audiences on all three nights were treated to some entertaining and at times thought provoking presentations.

Featured on the show bill for the week were the following productions:

The Philadelphia -- Smithers
The Misadventures of Romeo and Juliet -- Prince Rupert 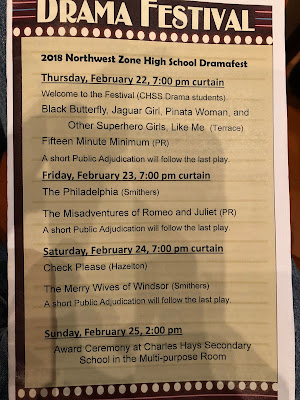 When the Awards were handed out on Sunday, nine awards were claimed by members of the host Charles Hays group, among the honours from the weekend.

Three awards for acting for the Misadventures of Romeo and Juliet, with Jordan Jackson, Henry Vo and Kathy Nguyen acclaimed for their work.

Fifteen Minute Minimum which was basically a two man show, gained the Excellence in Acting in a Lead Male Role Award with both Marvin Wilson and Joseph Cooper-Shaw sharing in the success, recognized for their talents in bringing the characters of Boris and Stanislov to life.

That production also took home the top honours from the competition, chosen as this years Representative Play for the Northwest.

The Drama Festival's adjudicator Joan MacLean hailed the way that the two lead actors made each other better during the course of their performance.

The Charles Hays Technical skills were on display through the week as well and for his work Scott Langille claimed three awards from the three nights of shows.

Such was his dedication towards the success of the event, that he not only worked on the Charles Hays productions, but assisted each of the other participating schools in getting acquainted with the Lester Centre lighting and sound systems.

For his efforts Mr. Langille received the Spirit of the Festival Award and Excellence in Lighting Award, as well as an honourable mention for the Sound Design Award.

Charles Hays will now take Fifteen Minute Minimum to the Provincial Stage in April, when they participate in the Provincial Drama Festival at Douglas College from April 26 to 28.

Making the journey to provincials has become almost a regular occasion for the Charles Hays Drama program which takes place under the watchful eye of Alison O'Toole, with many of the presentations of past years making their mark at the Provincial competition.

In addition to showcasing the North Coast production, those attending the event will also get exposure to the range of material being created across BC, as well as to take part in workshops and learn from professionals in the Vancouver area who will be part of the provincial festival.

Prince Rupert residents may get a chance to see all of the Charles Hays productions one more time this Spring, when the annual Dessert Theatre showcase takes place, the date for that event will be announced in the near future.

The Charles Hays Twitter feed features a number of photos from the three nights of the Drama Festival, as well as some Periscope video of the Sunday adjudication notes and Awards presentation.

For more items of note about Charles Hays see our SD52 Archive page, further background on community events in Prince Rupert can be found on our archive pages below:


To return to the most recent blog posting of the day, click here.
Posted by . at 2:21 PM