Tuesday's Speech from the Throne provided a snap shot of some of the plans for this session of the Legislature from the NDP government in Victoria, and in among all the promises and declarations was a bit of a shout out for a major investment project that will be taken on by Prince Rupert's CityWest,

As part of a the portion of the speech that reflected the government's intentions to bridge the divide between rural and urban regions of the province, the Sub Sea Internet Fibre project was highlighted by Lieutenant Governor Julian Guichon on Tuesday.

Speaking for the government, the Lieutenant Governor observed that projects such as the Sub Sea Fibre plans mark the kind of the shared investment between federal and provincial governments that the Horgan government will continue to look to develop.

"Government recently announced a Federal/Provincial funding agreement that will connect 154 remote coastal and Indigenous communities through high speed internet, this investment will strengthen local economies, connect businesses with the world and give more rural communities the opportunity to grow, diversify and compete. This is but one example of what we can accomplish when we work together"  -- Communication expansion for rural communities made for one element of the Speech From the Throne delivered by Lieutenant Governor Judith Guichon on Tuesday 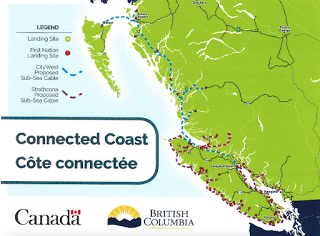 CityWest and City of Prince Rupert officials were on hand last month for the announcement in Vancouver, which will see the Sub Sea Fibre project move forward as part of the Connect to Innovate program hosted by the Federal government, with the Provincial government also providing for funding for the expansive communication infrastructure project.

As we outlined on the blog last month, the CityWest portion of that large scale communication infrastructure project will see the Prince Rupert owned communication company in charge of the fibre project from the North Coast to Vancouver Island and over to Haida Gwaii.

More notes on Tuesday's Speech from the Throne can be reviewed here.

For further background on CityWest projects and items of interest see our archive page here.


To return to the most recent blog posting of the day, click here.
Posted by . at 10:47 AM