A serious collision Wednesday evening on Highway 16 between Terrace and Prince Rupert has tragically resulted in the death of  Prince Rupert woman, a passenger in an SUV that was struck by a logging truck around 7 PM last night.

Terrace RCMP relayed the account of the incident which saw an empty logging truck, heading eastbound strike a moose, then lose control before colliding with a westbound SUV which belonged to the Department of Fisheries and Oceans.

The passenger, who has not been identified, was pronounced deceased at the scene, she was a civilian employee with DFO.

The driver of the SUV is in hospital, having suffered serious injuries as a result of the incident.

The driver of the logging truck was also transported to hospital with minor injuries.

The incident resulted in the highway to be closed for much of Wednesday evening and the overnight period. 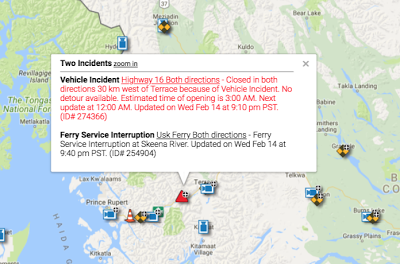 A large number of Emergency Response services attended to the scene which was located roughly 30 kilometres east of Terrace, among those services that were in attendance:

Ministry of Highways and Transportation

Units from both the Terrace and Prince Rupert Ambulance Service

Worksafe BC also assisted at the scene

The West Pacific Region Traffic Services based out of Terrace is continuing with the investigation.

You can review more on the incident from this information release from the Terrace RCMP.

For more items related to the work of Emergency Responders in the Northwest see our archive page here.


To return to the most recent blog posting of the day, click here.
Posted by . at 12:38 PM