For those that have suffered the perils of driving along the city's streets these days and have taken on the challenge of the ever increasing slalom run of pothole avoidance, Councillor Gurvinder Randhawa  has heard you!

The City Councillor, who is the owner operator of a driving school, as well as the operator of a taxi cab in the city, brought forward the concerns of the city's motorists on Monday evening, highlighting a few areas where residents are anxious to see some road remediation take place.

Mr. Randhawa made note for Council that he has heard from many residents about the particularly nasty condition of the roads in the community, calling attention to the route on Sixth Avenue East from McBride to the east end of the city as perhaps one road that is in need of some immediate attention. 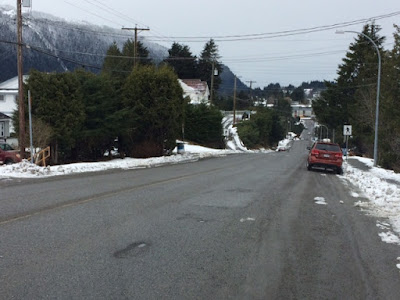 Another area of road repair note, among many in the community, is the circuit around Summit Avenue.

It is a roadway that seems to be in particular need of some prompt attention, with a growing number of potholes appearing along the twin routes that lead to the Prince Rupert Hospital.

And while the issue has now been raised in public forum at City Council, it would seem that any immediate relief to the situation may yet still be some ways off in the future.

In his reply to Councillor Randhawa, Mayor Brain's only comment related to the roads at the moment was to state that the city's paving program for 2018 would be released following the winter season,  with no actual date or timeline offered up by Council at Monday's session.

You can review the discussion on the state of the roads from the City's Video Archive, it comes up towards the end of the night's work at the forty four minute mark.


For now, motorists will have to endure the bone jarring journey across the city's streets, with city crews hopefully dispatched to address to some of the larger issues as best they can until the larger paving program is rolled out.

As we await the city's blue print for road rebuilding for the year, we shall attempt to compile a list of those streets in the city that our readers may have found particularly challenging.

You can add your contribution to the comments section of this post in the space available below, as well as through our twitter feed, where we highlight our stories of the day.

Should you have a road to add to that list, make sure to use the hash tag #PrinceRupertPotholes to make for a rolling archive of trouble areas in the city.

A wider overview of the city's Infrastructure issues can be found here.


To return to the most recent blog posting of the day, click here.
Posted by . at 3:23 PM