Friday was announcement day in Terrace, and when Health Minister Adrian Dix took to the podium, residents of the Terrace region heard exactly what they had wanted to hear, word that the province will move ahead with long awaited replacement for the city's Mills Memorial Hospital.

Dix noted that the project to replace the aging Mills facility has been a discussion point in Terrace for a few years now, with the replacement facility now a priority for the NDP government.

“We know people have been waiting a long time for a new hospital in Terrace, so our government made the project a priority and moved quickly on approval,”  ...“We are taking actual steps on a state-of-the art facility that will serve families in the region for decades to come.”

The path towards Friday's announcement began in 2010, with the work on a concept to present to the then Liberal government getting underway in 2012, the proposal submitted in April of 2014.

With a provincial election bringing a new government to power last May, the concept plan got an update and was re-submitted in October 2017.

Now that it has been approved, the planning will shift from concept to business plan and procurement.

A timeline that will see the planning aspect take about 18 months before the project is put up for procurement,  funding will be achieved as part of a partnership with the NorthWest Regional Hospital District.

The new facility will see an expanded footprint that will double the existing space of the Mills facility and will see the new hospital designated as a Level Three Trauma centre.

As Northern Health Board Chair Colleen Nyce observed as part of Friday's announcement, the investment in the health care of those living in the Northwest will be continue to be a collaborative effort.

“We are thankful to Minister Dix and the provincial government for recognizing the need to invest in the health care of the people of the Northwest by approving this plan to move forward. ... This has been a collaborative project between the Province of B.C., the North West Regional Hospital District, Northern Health and the people residing in the many communities served by Mills Memorial Hospital.”


The big push to build support for the replacement plans came one year ago, when Terrace organizers put together an impressive campaign to deliver the concept for the proposed new hospital, stressing the benefits for the Terrace region that would come with a Level Three trauma designation. 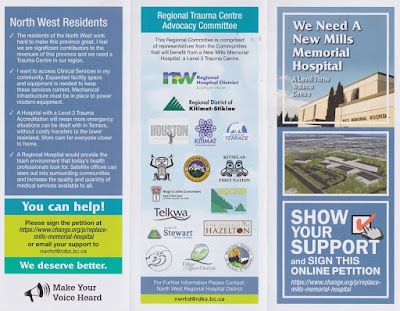 You can review the full announcement from the Provincial government here.

The quest for a replacement has been the focus for many in the Terrace region for a number of years now, some of the work that led up to Friday's success can be reviewed below.


Friday's announcement dominated much of the news from Terrace and echoing across the Northwest through the weekend, a sample can be found below:

For more items related to Health Care in the Northwest see our archive page here.

To return to the most recent blog posting of the day, click here.
Posted by . at 12:16 PM