For many Prince Rupert residents, the final day of the weekend is one that will require a bit of manual labour, with a Pacific weather system clashing with colder air from the North making for a snowy landscape for the City today. 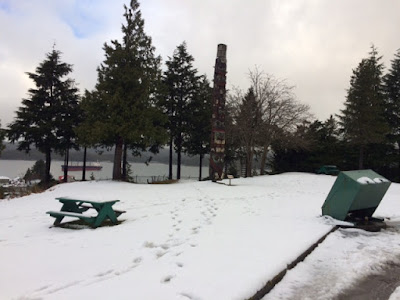 City of Prince Rupert work crews have been out around the city, keeping the main artery roads clear before working towards the side streets and other routes around the city.

Highway contractors continue to work McBride, 2nd Avenue West and Park Avenue routes, as well as the highway out of the city.

The snow also makes for a timely reminder of the City of Prince Rupert's Snow and Ice Clearing regulations.

The Environment Canada forecast for the day calls for more Snow to continue through the morning, shifting to rain or wet flurries for the afternoon and evening period.

Total accumulation levels are listed as up to 4 cm before the weather pattern moves on. 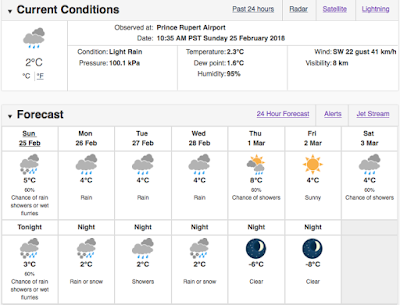 The sudden dump of fluffy white snow, will see Rupertites taking to some of their favourite hill locations such as the Golf Course and other spots to test out the toboggans and saucers for a few hours, that before the more traditional weather patterns return.

In one of those weather mysteries of the North Coast, a few short kilometres down the road, the roads are clear and the prospect of snow but a rumour, the Drive BC highway camera at the Port Edward turnoff providing the visual evidence of the dividing line between a day of shovelling and a clear road.

However that's somewhat of a false illusion for travellers, a few more kilometres down the highway and Mother Nature has made a return, with snow accumulating at Rainbow Summit and beyond.

You can keep up to date on the ever changing road conditions through the day from the Drive BC website or twitter feed.

For those travelling today, a glimpse at the network of Highway cameras along Highway 16 will give you an indication as to what's ahead for your journey.


For more items related to weather events for the North Coast see our archive page here.


To return to the most recent blog posting of the day, click here.
Posted by . at 10:58 AM