Transport Minister Marc Garneau has introduced some new names and reappointed one current member to two Boards of Directors from organizations that the Federal government has responsibility over, on the North Coast.

Bringing some diverse backgrounds and experience to the  range of positions that were available for 2018.

The two Boards of note for the Prince Rupert region include Ridley Terminals which received four appointments and the Prince Rupert Port Authority, which saw a vacant position filled by a familiar name from the Northwest.

At Ridley the Appointments were as follows:

David Bromley was reappointed to a one year Term as Director,

Shiva Dean was appointed to a term of three years

With Catherine Wade also appointed to a four year term. 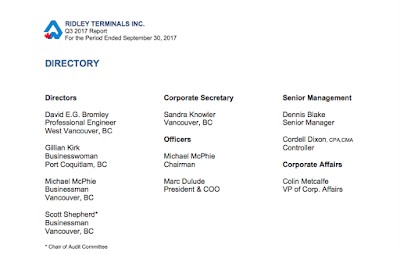 At the Prince Rupert Port Authority one new name was introduced to the Board, with Beverly Clifton Percival appointed by the Federal Minister.

Ms. Clifton Percival is from the Gitxsan First Nation, she will take over the Directorship on the Board that was held by Elmer Derrick. Mr. Derrick passed away in September of 2017.

The Port of Prince Rupert introduced their newest member through an information release this morning.

The most recent listing of the remainder of the Board of Directors for the Prince Rupert Port Authority is available through the Port's website. 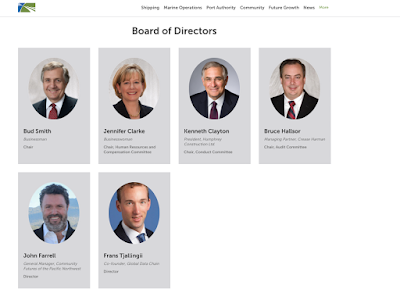 The Minister also thanked those who have served on the respective boards in the  past, though in the case of the Ridley announcement, the names of those that will be making their exit were not outlined in the appointment notice.

"I am pleased to announce that these highly qualified Canadians have agreed to serve in the transportation sector. Their appointments, which follow our open, transparent and merit-based appointment process, will ensure continued good governance. I also take this opportunity to thank outgoing board members for their valuable service."

You can review the announcement from Minister Garneau here.


To return to the most recent blog posting of the day, click here.
Posted by . at 9:17 AM