The annual season finale for students of theatre is making its stop this year in Prince Rupert, as Charles Hays Secondary plays host to the 2018 Northwest Drama Festival.

The Lester Centre of the Arts will be the venue, as Six One Act plays take to the stage over the course of three nights, with students from Smithers, Terrace, Hazelton and Prince Rupert all putting their performances up for review of the adjudicators panel and a chance to move on to the Provincial competition later this Spring.

There are close to 75 students involved in the six performances scheduled over the three nights of the Drama Festival Zones presentation.

Representing Terrace will be Caledonia Secondary, with the Smithers Secondary and Hazelton Secondary programs also represented, the participants of the highly acclaimed Charles Hays theatre program will showcase what Prince Rupert's students have to offer. 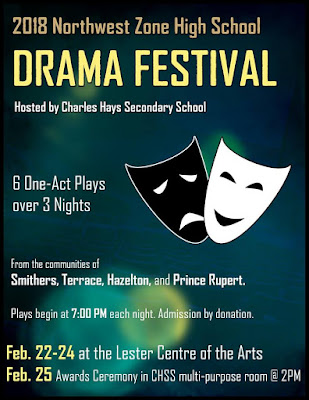 The schedule for the three nights at the theatre is as follows:

Black Butterfly, Jaguar Girl, Pinata Woman and other Superhero Girls, Like Me (Terrace)

The Misadventures of Romeo and Juliet (Prince Rupert)

The Merry Wives of Windsor (Smithers)


The Awards Ceremony for this years Zones Festival will take place at the multi-purpose room at Charles Hays Secondary, on Sunday, February 25th at 2 PM

Admission to the Drama Festival is by donation at the door.

The three day run for the Drama Zones, provides North Coast residents with a chance to see what the artistic minds of the Northwest Drama groups have come up with for this years competition.

In Prince Rupert, the thriving arts program is led by Charles Hays Drama Instructor Alison O'Toole, a fixture in the community theatre scene and a mentor for many of the students from Charles Hays present and past, with many of her former students still found in theatre presentations locally and in distant locations.

The Charles Hays production of Freak claimed the Northwest Zones competition last year, with Ms. O'Toole' students taking their Zones winning play on the road to Provincials in Vancouver.

The Provincial competition for 2018 is set for New Westminster from April 26 to 29, the Provincial Drama Festival is sponsored by the International Alliance of Theatrical Stage Employees (IATSE) and the National Theatre School, they are picking up the support of the Drama Festivals that once was championed by the now defunct retail chain Sears.


To return to the most recent blog posting of the day, click here.
Posted by . at 11:31 AM

Email ThisBlogThis!Share to TwitterShare to FacebookShare to Pinterest
Labels: Drama Zones at Lester Centre February 22 to 24