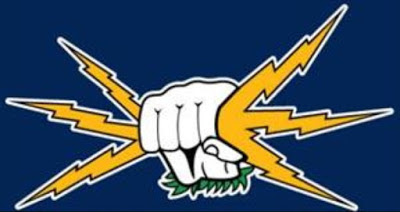 Prince Rupert is the hub for all things hoop this week, there's basketball everywhere you look with the All Native Tournament now in full flight and at the high school level, the local teams are showing their stuff on the big stage as well, with strong success in Northwest Zones play over the weekend just past.

Following competitions in two locations over the last 72 hours, Charles Hays teams are now Two for four when it comes to Provincials berths so far, with both the Junior Boys and Junior Girls Rainmakers squads claiming victory in the regional Zones.

The hometown benefits of a full house at the Charles Hays Gymnasium helped the Junior Girls to claim their spot in the annual provincial tournament in Langley, as the Rainmakers topped the Mystics from Hazelton  61-42 in the Northwest Zones final.

Coach Sonny Henry's team overcame some early struggles to take charge of play by the second quarter, pushing ahead for good in the second half.

The girls now look towards a trip south and what will be a chance to measure themselves against some of the top teams in British Columbia .

The 37th Annual edition of the Junior Girls provincial championship takes place from February 28 to March 3 at the Langley Events Centre.


On the Boy's side, Kevin Sawka's Junior Rainmaker squad were on the road in another instalment of the legendary rivalry between Charles Hays and Caledonia, with two high tempo games  making for some highlight reel basketball action.

Game One on Friday night featured some strong back and forth basketball, requiring extra time to declare a winner with the Rainmakers finally putting some distance between themselves and the Kermodes with Charles Hays claiming a 55-42 victory in the ice breaker.

Game two on Saturday followed much of the pattern of the first game, with defence playing a strong role in the Rainmaker success, pacing the team to a 40-32 win and the berth in provincials, the third consecutive year that the Makers' have claimed the Northwest Zones.

The Junior Boys make the first of the trips south later this month.

The 49th annual Junior Boys Basketball championships are set for February 24 to 27, as for all of the High school championships, the hardwood courts of the Langley Events Centre will be the venue for the four tournament.


The Senior Boys were busy on the weekend as well, though their adventures resembled some out takes of that cinematic masterpiece Planes, Trains and Automobiles, (in this case minus the plane) as a string of weather related situations conspired to keep the Rainmakers trapped on a train for a good portion of their journey, first near Port Edward and then for an extended stop at a siding in Endako.

With the final part of their journey on the less than rocketing down the tracks Skeena interrupted,  the team boarded a bus for the final leg to Prince George and finally a change to take to the court in that snowbound city.

With the original schedule somewhat it tatters owing to the travel delays, the Rainmakers made the best of the revised travel plan, working in some exhibition play upon arrival, jumping off the bus and onto the court for some worth against the host Condors.

Friday provided for a game time challenge against the Condors one of the top teams in Prince George and AAA basketball province wide.

For their perseverance from a trip that threw a lot at them, the Rainmakers held off the Condors, taking a thrilling 88-81 victory, a strong way to cap what may be the ultimate of team building exercises. 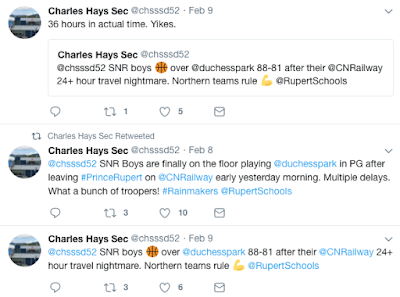 The Rainmakers now put their focus on the Northwest Zones championship which they will host at Charles Hays Secondary on February 23rd and 24th.

The Senior Girls had the weekend off and will spend the remainder of this week making preparations for their own shot for a trip to Langley.

The Schedule for the weekend play looks as follows:


More notes on high school sports across the Northwest can be found on our archive page.


To return to the most recent blog posting of the day, click here.
Posted by . at 12:12 PM