Themes related to the issues of the fishery on the Pacific coast made for wide ranging discussion, with participants putting some significant focus on the recently delivered new Fisheries Act from the Federal government, weighing in on areas that they support and other elements where more consultation and change is required.


One topic that is a major concern for North Coast fishery representatives is the need to address issues related to owner/operator policies and a need for adjacency for the North Coast to bring more of the catch from local waters to local fish plants.

It's a concept that the Local UFAWU-Unifor office has been raising awareness towards for a number of years, increasing their volume on the issue with the closure of the Canfisco Cannery lines at the Rupert plant in 2016. 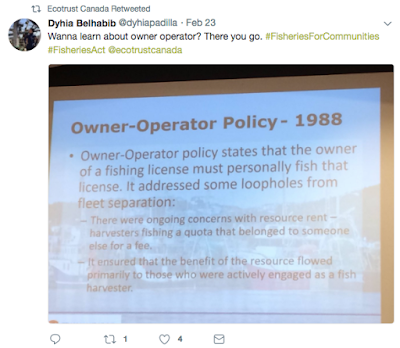 Delegates also put forward some thoughts towards the need for continued advocacy for fisheries issues a topic which made for much of the current of discussion on the day,

As the event was rolling along on Friday, North Coast MLA Jennifer Rice shared some snapshots from the Vancouver gathering through her Facebook page.

For Mr. Brain the trip to Vancouver made for just the latest of journeys in what has been a very busy two months for the Prince Rupert Mayor.

Since the arrival of the New Year in January, he has assembled a travel itinerary that has taken him to Ottawa, Vancouver, Prince George as well as mid February trip up the coast to Juneau, Alaska on behalf of the City.

Last week, he shared some notes with CFTK TV, offering up a short synopsis of his discussions in Alaska which focused on seeking some forward momentum on the Alaska Ferry Terminal dock project, which has been suspended for a number of years now owing to differences of opinion between the U.S. and Canadian government.

While the ferry dock issue is one concern, another issue of note for the Alaska Marine Highway service has been the suspension of service between Prince Rupert and Ketchikan, that as a result of vessel availability for the AMHS, which has been facing a number of budget cutbacks over the last few years.

There was no indication if the Mayor and Alaska officials discussed the Marine Highway fleet allocation issues and improvements to the Prince Rupert-Ketchikan schedule during he Mayor's trip to Juneau.


To return to the most recent blog posting of the day, click here.
Posted by . at 9:14 AM