It's been a busy first two months for the Mayor of Prince Rupert, with Juneau, Alaska the latest destination on his travel itinerary list, with Lee Brain in the Alaska capital this week for the Mid Session Summit of the Southeast Alaska conference.

The Mayor departed for Juneau following Sunday's All Native Basketball Tournament Opening Ceremonies, where he provided the greeting to participants on behalf of the City of Prince Rupert.

He then made his way north, to join the collection of municipal government leaders along the Alaska panhandle who gather twice a year, with the February session a smaller version of the larger South East Conference gathering of the fall.

This years two day get together offers up a range of activities and workshops for the Mayor to take in during his stay in the Alaska capital.

Delegates will be exploring a number of areas for discussion based on the convention theme of Navigating the Southeast Economy.

Tuesday featured the Keynote address from Governor Bill Walker and then panel discussions on such issues as Fisheries, Energy, Forestry, Mining and Economic Development.

Today's agenda also features a few areas of possible interest for the North Coast, including a session with the Transportation Committee in the morning and a look at reform of the Alaska Marine Highway System in the afternoon.

You can review the full Agenda for the Southeast Conference Mid Session Summit here.

Mr. Brain provided a short synopsis of his plans while in Juneau through his Facebook page 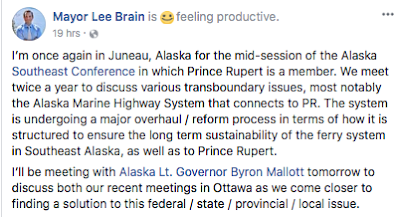 The trip to Juneau marks the fourth trip that has been publicly noted when it comes to civic travel by the Mayor so far in 2018.

Previous journeys have taken him to Vancouver for the Sub Sea Fibre announcement which awarded funding to CityWest for work on the North Coast to Vancouver Island and Haida Gwaii.

The Mayor and City Manager Robert Long also spent a number of days in Ottawa in January and early February for meetings with federal officials and members of the Federation of Canadian Municipalities.

How many times civic officials and staff members leave town on civic business remains a bit of an unknown for the public.

So far, the City of Prince Rupert has not provided for a public listing related to travel on behalf of the city through the city website, nor is there a breakdown of cost and expenses when it comes to trips by municipal officials during the course of the year.


To return to the most recent blog posting of the day, click here.
Posted by . at 10:04 AM

Email ThisBlogThis!Share to TwitterShare to FacebookShare to Pinterest
Labels: Mayor Brain in Alaska for meetings