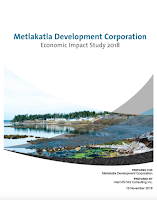 A study commissioned by the Metlaktla First Nation and released today, provides an instructive review of the impact of the investments made by the First Nation and how they have helped create employment and grow the economy of the region.

Prepared by InterVISTAS consulting, the document makes note of how the Metlakatla Development Corporation has contributed to the region through core businesses and the creation of strategic partnerships.

And on those themes, Metlakatla and the MDC are clearly reaching the goals of their mandate.

From the data reviewed to the end of 2017, it has been determined that a total of 430 jobs contributing $21.4 million in wages in the Prince Rupert area were supported by the operations of the Metlakatla Development Corporation.

160 of those jobs are through the MDC itself, another 60 are through partnerships with Coast Tsimshian Enterprises, the stand alone organization which Metlakatla and Lax Kw'alaams are partners in, the employment generating close to 10 million dollars in wages.

87 percent of the positions are full time, providing for an average wage of $53,000 per year.

The remainder of the 430 jobs that are highlighted in the report are through a number of other partnership engagements across the region, which provide for indirect jobs that support core businesses. All of the associated businesses generate over 21 million dollars in wages throughout the province,.

In total the impact of the MDC investments on the North Coast makes for a 45.6 million dollar boost to the GDP to the provincial economy.

As part of the report, Metlakatla Development Corporation CEO Harold Leighton made note of the growth the organization has seen over the last thirty years and the contribution it makes to the North Coast economy.

"With 220 direct jobs and more than $9 million in direct wages in 2017 alone, the Metlakatla Development Corporation is proud to be a significant contributor to the economy of the North Coast and help create enhanced opportunities for those who live here ... The growth we have seen over the last thirty years is a testament to the vision and foresight of our board of directors and the hard work of all the staff who have helped make this vision a reality" 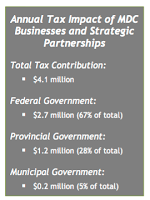 In addition the creation of jobs and investment in the North Coast economy, the Metlakatla report also highlights the  financial benefits that the MDC delivers to all levels of government.

The study has determined that 4.1 million dollars in taxes have been distributed to Federal, Provincial and Municipal governments, with the City of Prince Rupert having received $210,000 from MDC operations in the region.

As well as the financial deposits, the Metlakatla Development Corporation has a strong interest in supporting the local community, having donated over 63,000 dollars and more than 90 hours of volunteer to Prince Rupert area organizations. 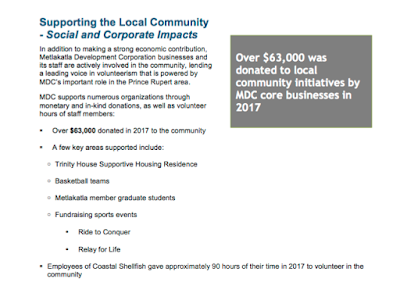 "The Metlakatla Development Corporation understands the importance of giving back to the community that supports our businesses and improves the lives of our employees and we are always happy to donate to worthwhile causes and organizations in and around Prince Rupert." -- MDC CEO Harold Leighton on community support

The MDC also delivers financial returns to the Metlakatla Governing Council, in 2017 over 400,000 was provided to the Council.

Revenue sharing contributions that supported infrastructure development and capacity within the community brought in over 211,000 dollars. 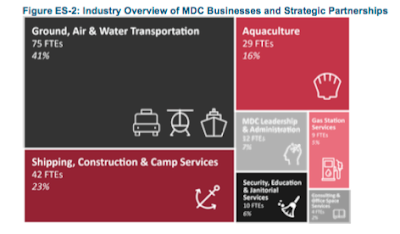 The report also provides a helpful guide for residents as to the growth of the Metlakatla Development Corporation and just how much it has immersed itself into the North Coast economy.

The list of stand alone MDC corporations, those shared with Coast Tsimshian Enterprises and other partnerships makes for an impressive listing of the Metlakatla First Nations participation in the economy and industrial base of the region.

Shared with Coast Tsimshian and other Strategic Partnerships

All members of the Metlakatla First Nation that are sixteen years of age and older are shareholders in Metlakatla Development Corporation.

Formed in the late 1980's MDC has grown from a single business that provided transportation for the community, to now include the expanding footprint that the Community has put down servicing much of the economic base of the region.


You can review the summary of the report here.

More notes related from our archives on the Metlakatla First nation can be found here.