More security now in place on BC transit buses across province 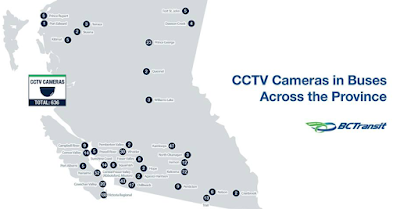 Transit users across the province, including Prince Rupert and Port Edward will be going back to the days of their class photos when they board a bus these days, that at BC Transit makes note that over 600 of its buses now feature Closed Circuit Television cameras.

The program which was rolled out widely through 2018 saw cameras installed in much of the existing fleet, while the newest models now in service came with the cameras already installed.

The program was expanded from a pilot project back in 2015 and have already been used in some communities to provide for investigative support, including over 360 police investigations province wide.

Each bus is equipped with from four to eight cameras which record events from the interior of the bus, with a high definition camera also in use in the drivers compartment to record events both in front and on the outside of the transit vehicle.

The cameras are not monitored live, but video files which are encrypted are stored on hard drive for up to seven days should they be required for any investigation purposes.

The information collected is done so as part of the specifications from the Freedom of Information and Protection of Privacy Act.

For the North Coast, the new focus on security and safety will be in place for the routes both in Prince Rupert and Port Edward. 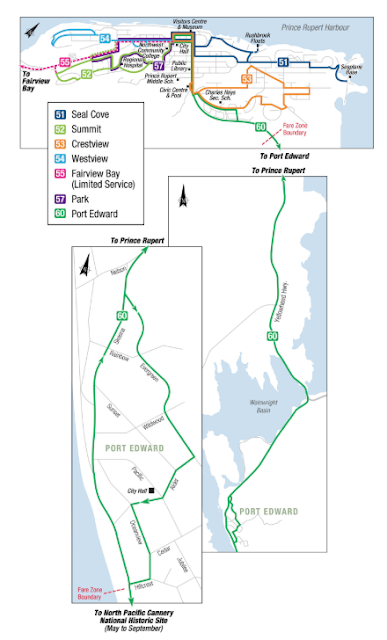 The new security measures are also in place for Terrace, Kitimat and the runs of the Skeena Valley to name a few of the destinations along the BC Transit Northern map


Erinn Pinkerton, CEO and President of BC Transit outlined the focus for the security measures now in place.

“We place the highest priority on safety. The installation of CCTV cameras demonstrates our commitment to safety to our staff and customers. Anything that can deter incidents or assist in investigations is a welcome enhancement for our service.”

You can review BC Transit's notes on the launch from their Prince Rupert Transit home page.

More notes related to transportation issues along the Highway 16 corridor can be found rom our archive page here.

To return to the most recent blog posting of the day, click here.
Posted by . at 10:07 AM

Email ThisBlogThis!Share to TwitterShare to FacebookShare to Pinterest
Labels: Security features for BC Transit vehicles