Monday's City Council Water Review - Much of the same territory of the last month covered; along with a few new notes to share

The much anticipated first Prince Rupert City Council session for 2019 arrived last night, providing as it would for the first opportunity for City Council as a whole to offer up some comments on the nature of the city's ongoing water issues.

Though as the evening began it was Councillor Wade Niesh taking the centre seat for the proceedings, subbing in for the absent Mayor Lee Brain.

With both the Mayor and Councillor Blair Mirau away on the night, it was a light bench that took to the topic of the city's water issues, something which was addressed in the last segment of the evening's rather short City Council session, which took just shy of thirty minutes to conduct.

Councillor Wade Niesh handled the bulk of the Boil Water update by first noting that there would be no opportunity for those in attendance at City Council chambers to speak on the water issue at the council session.

Noting that the public will have an opportunity to raise their concerns in two weeks at the next Committee of the Whole session as part of the January 28th meeting.

Mr. Niesh did observe that Council members would be available for discussion once last night's meeting had come to an end.

However, as those who follow council sessions through the city's streaming feed would realize, those post meeting conversations would thus take place outside of any official record on the night.

As for the presentation aspect of his talking points, the update was more of a replay tutorial of sorts from what Mayor Brain has delivered in the past four weeks, focused as to what led to the current situation and what the city has done since the first notice to citizens was issued on December 14th.

Mr. Niesh outlined the work and timeline behind phases one and two of the water supply project, with the current Phase Two portion set to get underway for the construction of the Dam at Woodworth Lake.

That 17 million dollar project was awarded in the fall of 2018 and featured a significant jump in cost from what had originally been forecast.

One aspect of the dam that doesn't seem to get as much of an overview from Council and may have contributed to that jump in cost, are the hydro generation plans that the city has for the dam.

That element was included in the dam at the time of the bid request, despite council not detailing if they have any kind of agreement in place to sell that hydro to BC Hydro, or if the hydro utility is even accepting third party power generation projects at the moment. 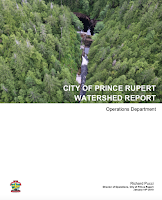 The third phase of the city's water project will be the submarine line from Woodworth Dam to the city, creation of a barge access point and the development of a water treatment plant.

As it stands today, the city's financial notes indicate that the project would cost some 29 million dollars, with the City expected to contribute 7 million dollars towards the cost of it.

Documentation now available on line from the City website (see here) covers much of the same material that Mr. Niesh spoke to on Monday and also offers up a helpful overview as to what the water treatment plans will include.

And while previous discussions, on the water treatment project, including the Mayors Hays 2.0 presentation of last Spring focused mostly on the storm water and sewer line aspects of that infrastructure program; the new material provided on Monday digs a little deeper into the current concerns over the state of the city's drinking water and the city's long range solutions for it.

When it comes to the current Boil Order Notice, it remains in place, and while city staff is hopeful of better test returns ahead, at the moment there does not appear to be much of a change in the status of the water, with the City noting that it will be  up to Northern Health to make any final decision as to when residents may once again drink their water without first boiling it.

All of those Council members that were in attendance on the night spoke briefly to the situation, providing for  a range of observations on the topic and offering their views on the reaction of the public towards the ongoing need to boil their water.

The majority of the commentary one of understanding of the concerns of the public, while praising the work of city staff during the current situation and previously in their work in seeking out grants for public infrastructure.

Mr. Niesh's presentation style seemed to change a bit as the meeting came closer to its end, taking on some of the more combative tone last seen during the Ridley Island Tax discussions back in October.

Some of his more forceful language was directed towards some of the feedback that has been delivered towards the city through Social media, with the Councillor seemingly suggesting that Facebook and other forums were not a reliable source of information or commentary.

An observation that was somewhat ironic, considering how Mayor Brain for the most part used that very same social media forum as his only option in information sharing for the majority of his lengthy reviews of the last month.

He also, without expanding much on it, attributed some of the current public concern over the state of the city's water to the work of Internet trolls and newcomers to the community, a theme of overview that Councillor Nick Adey tried his best to offer some helpful counsel on for the Acting Mayor.

Through his comments, Mr. Niesh seemed to direct residents towards the weekly paper as his preferred method of information delivery, a nod of support for the paper which has been helpful in delivering Council's main talking points during the current situation.

He also directed some attention towards Federal and Provincial officials suggesting that residents need to contact their representatives to seek movement on the Water Treatment plans.

That portion of his presentation had the Councillor seemingly seeking the assistance of the public in speeding up the decision making process from the federal and provincial level, with word on the fate of the  city's most recent grant application for the Phase Three project expected to be delivered sometime in the first half of this year.


The Acting Mayor's frustrations that residents had not relayed their concerns through his civic email account, or contacted him personally during the course of the last month also served to make for some of his narrative.

However, it should also be pointed out, that neither Mr. Niesh, nor any of the other council members, other than the Mayor, had much of substance on the water concerns to share with the public over the last month through any of the many communication options currently available to them.

The City has also posted a Frequently Asked Questions sheet to the city website, which covers many of the points that Mayor Brain, or the City's Communications office have relayed since December 14th.

That document did deliver one glimmer of hope for the community however, with the City observing that they are looking into the cost of reconnecting with the primary source of water by using the newly installed water lines from Phase One.

The information sheet did not outline how soon that review would be completed, or when they might announce their findings as to the feasibility of returning to the Woodworth Lake source.

But one imagines that if at all feasible, that would perhaps be the best short term approach for Council to take what has been a red hot political issue off of their table until the remainder of the infrastructure issues are sorted out.

The City also seems to continue to dismiss the idea of posting the results of the ongoing  water sampling to the City website.

An option that would offer the public some kind of guidance as to the frequency of the tests and whether progress is indeed being made towards a return to some sense of normalcy in the community.

For the most part it would appear that for now, the plan the City has in  mind is more of the same of the last month, with periodic notifications for the public until the Boil Order Notice can be removed.

You can find updated notes on that Boil Order from our archive page here.

As Mr. Niesh noted at the start of the Monday session, should the public wish to share comments with council on the City's current water woes, they can do so at the January 28th Council session, taking part in the Committee of the Whole portion of that evening's work, which allows for public comment.

The full Council session is available for review below, the City water situation discussion starts at four minute the minute mark.

We will also add to our usual review of City Council sessions with our regular Council Timeline feature for the Monday session during the course of the next few days.

More background on Monday's Council session will also be available from our Council archive page.

With more items of interest related to City Council found through our Council Discussion archive here.