MLA Rice's 'clarifications' on behalf of Premier Horgan, make for political flashpoint in the Northwest 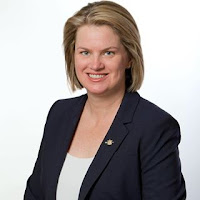 There's a bit of fallout to be addressed this evening by North Coast MLA Jennifer Rice, following a Facebook post to her Social media platform on Thursday that caught the attention of Ellis Ross, the Liberal MLA from Skeena.

Yesterday, Ms. Rice posted some comments to go along with this clarification from the Premier's Office which were provided  to expand on the comments Premier Horgan had made at a press conference on Wednesday.

During the course of his January 9th press conference,  the Premier spoke to the many challenges that are facing all levels of government, Federal, Provincial and  Indigenous.

The press conference was held to speak to the serving of a court injunction by the RCMP and the arrest of fourteen people at a First Nations checkpoint on the Morice River Bridge which was in place in protest over plans by Coastal GasLink to begin work on a natural gas pipeline.

What seems to have put Ms. Rice on the political hot seat in the Northwest, was her preamble to the Premier's message which appears to express her view as to how the elected Band council system was designed with the historic intention to annihilate Canada's First Peoples.

As word spread of her post, one constituent posted to her commentary thread, calling into question the way that the North Coast MLA had worded her observations, with Ms. Rice seeking to do a a little damage control it would seem in a follow up response. 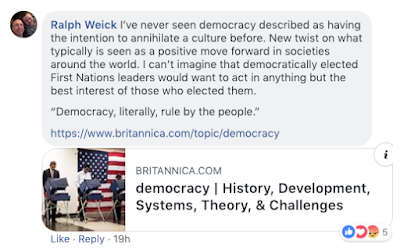 Her final words for her constituent however, do seem to make for a puzzling approach to the issue.

After having opened the debate through her original post of Thursday afternoon, she later appears to want to try to limit, or control the discussion of the themes that she has presented.

You can review her original comments as well as the entire thread both pro and con towards her talking points here.

To this point, there have been no statements, or comments made by elected First Nations representatives on the North Coast when it comes to the MLA's observations of Thursday.

The North Coast MLA's comments did however capture the attention of Ellis Ross, the current Liberal MLA for Skeena and someone quite familiar with the elected council process, having served as the Chief Councillor for the Haisla Nation for a number of years. 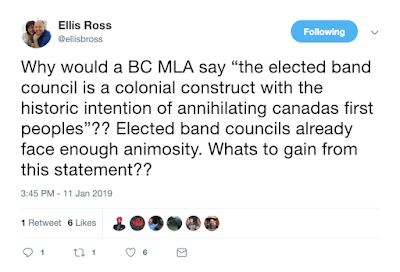 CFNR Radio has also outlined that the Liberal MLA has forwarded a letter of concern  MLA Rice's comments to Premier John Horgan, asking for clarification of her remarks and inquiring as to whether her views represent the official policy of the NDP government.

Mr. Ross also observed for CFNR, that the comments would appear to detract from the legitimacy in the way that the province deals with Band Councils and the authority of the elected chiefs.

Ms. Rice is the second NDP MLA in the Northwest that has raised the eyebrows of the Skeena MLA.

Earlier this week, he raised concerns over the attendance of Stikine MLA and Forests Minister Doug Donaldson at the Morice River Bridge checkpoint over last weekend.


A wider overview of the provincial scene can be found from our political blog D'Arcy McGee.