The Charles Hays Rainmakers will clearly not be flying under the radar as they continue their path towards a hopeful berth in the British Columbia High School Basketball Provincials in March, as the Maker's come off a Saturday night showcase in Vancouver that brought out the best of their game.

The Rainmakers took on some of the very recognizable names in High School Basketball over three days at the Vancouver College Emerald Tournament, earning their way to the Saturday final with some strong play and hard work.

It was a path that took them towards a finale with one of Greater Vancouver's most well known teams in the AAAA division ball Terry Fox Ravens and a game which the AA division Rainmakers battled in to the very end.

Saturday's final provided for one of the most entertaining basketball games of the year so far, a closely contested match that had the two teams trading points back and forth for the majority of the forty minutes.

The Rainmakers made use of a strong mix of aggressive offence and hard nosed defence along with an excellent use of the transition game to give the Terry Fox team as much as they could handle.

The two teams exchanged scoring opportunities through the first two quarters of the first half the pace of the first ten minutes one of frantic energy with a buzzer beating shot propelling the makers to a 17 to 14 lead after ten.

The Rainmakers served notice that the road would be challenging for Terry Fox through out the second frame of the match up, with another last second three pointer finding the range giving the Prince Rupert boys a 37-34 lead heading into the dressing room at half time.

The lead would change hands a number of times through the third quarter with the Fox Boys making the final scoring play of the third in the final minute and then shutting down the Rainmakers defensively to take a 57-54 lead into the final ten minutes.

The only setback to a near perfect game came in first half of the final quarter where the Terry Fox team seized opportunity to put a bit of distance between themselves and the Rainmakers opening up a six point lead, the widest margin for the night,  by the time the final three minutes would arrive.

Yet the resilience of the Prince Rupert Senior Boys was such that they clawed back right to the very end, coming close to either putting the game into some overtime, or stealing it outright with a late game run that saw them close to within two points with 4 seconds to go

As the final seconds wound down however, that late surge comeback wasn't meant to be, as the Fox squad gained two key insurance points and then shut down the final frantic Rainmaker attempts to secure the 74-70 final on the night.

The road to the tournament final took came following a pair of Rainmaker wins in the first two days of the three day event at Vancouver College.

The first was an 89 to 60 victory over Lord Tweedsmuir on Thursday, followed by an 88 to 69 win in the semi-final over Kitsilano to set up the showdown with Terry Fox.

Among  as strong unit of Rainmakers  who stood out on the weekend was Liam McChesney, who was selected to the Best Defensive and Best Offensive teams and First Team All Star.

Judging by the stream cast from Vancouver College on Saturday night and by the growing list of twitter notes and emails we have received at the North Coast Review, there was a loud and quite proud contingent of the Rainmakers supporters in the stands Saturday night to watch the fast paced and entertaining affair.

Our thanks to former CHSS teacher Brian Cameron for some of the highlight reel photos from Saturday's showdown, some of which you can view below: 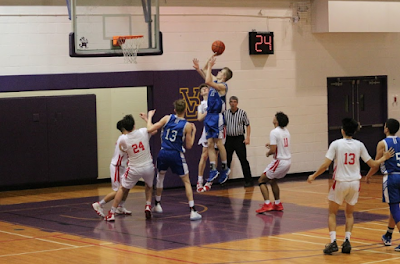 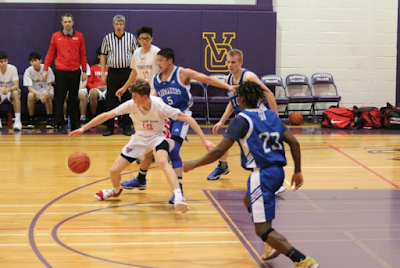 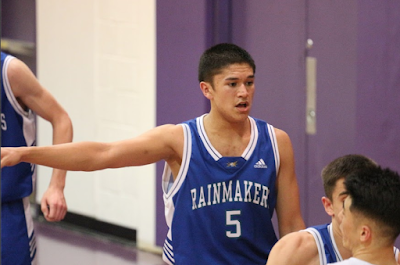 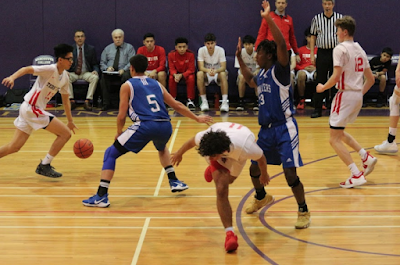 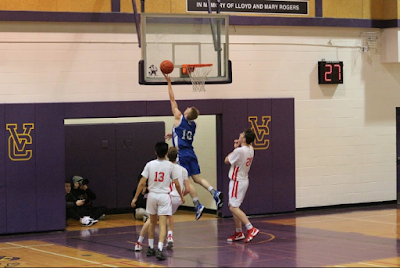 If you haven't had a chance to watch this 2018-19 edition of the Senior Boys in action, there are only a few opportunities left before the push for the Provincials begin, and taking in a game should be something that hoops fans will want to pencil in on their to do list.

The quality of their play, commitment to their game and ability to shut down the opposition for extensive stretches of time makes for an enjoyable forty minutes of sports viewing and bodes well for a shot a Provincial title in March, should they navigate the twists and turns that can come up along the way through February.

With the out of town travel now at an end for the run up to Provincials, an extended period of time at home is ahead for the Rainmakers.

Your next chances to head over to the Charles Hays Gymnasium for tip off comes up this weekend when Prince George's Duchess Park comes to town on February 1 and 2.

One week later it's another team from the Spruce City, as DP Todd make the trip to the coast for a two game series on February 8th and 9th.

The home stand continues into mid February with two games against Caledonia on the 15th and 16th.

And the high school season in the Northwest comes to an end with The Northwest Zones and the opportunity for a berth in the Provincials takes place at Charles Hays Secondary on February 22nd.

Email ThisBlogThis!Share to TwitterShare to FacebookShare to Pinterest
Labels: Rainmakers in Vancouver at Emerald Tourney