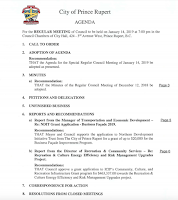 The first get together for the members of Prince Rupert City Council for 2019 tonight might find a fairly engaged audience in the seats of City Hall, something that doesn't happen very often at the best of times.

These however, aren't the best of times for some in the community, with a Boil Water Notice in effect since December 14th now entering its fifth week and those counselling patience facing off against those with strong frustrations making for the ebb and flow of Social media and letter to the editor submissions for much of the last thirty two days.

The last City Council session took place on December 10th five days prior to the city issuing the Boil Water Notice and thus, other than a few notices to the City's website and a string of Facebook posts from Mayor Lee Brain, the city council has been silent on the issue, with tonight offering up the first chance for public declarations and observations from the city's elected officials.

In a Facebook post from January 5th, Mayor Lee Brain outlined that city staff would be providing for a technical report tonight on the water situation, though the report is not listed as part of tonight's City Council agenda.

The work list for the night is somewhat light with only two items of note for Council to consider, which perhaps is a good thing, as it will allow for time for Council members to ask questions of the city staffers who provide their update tonight.

As well, thanks to rather roiling public debate through Social media and in the city's coffee shops, there would appear to be fairly interested collection of citizens looking for a chance to share their thoughts on the water issue, if allowed by Council tonight.

Among them, participants in a Kitchen Table Conversation over the weekend which has called for residents of the City to speak up and to learn more about the water troubles tonight at 7PM. 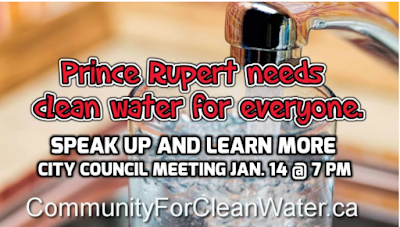 The Mayor also has also cultivated a fairly loyal group of followers and supporters on his Facebook page over the last four years and perhaps may be hoping to see some familiar faces in the crowd at Council tonight. There to lend support to the way that the city council has taken on the challenges of the water problems since December 14th.

The Council session starts at 7PM, those that can't make it down to City Hall can follow the evening's events through the City of Prince Rupert website Council feed or on CityWest Channel 10/310.

A wider overview of City Council issues is available through Council Discussion page.

We have also been tracking the Boil Water Order since it was announced on December 14th, you can review the entries from our archive page here.

Email ThisBlogThis!Share to TwitterShare to FacebookShare to Pinterest
Labels: Strong interest in Monday council meeting with water issues on the top of the list