Council has two conversation topics for the Ministry of Highways 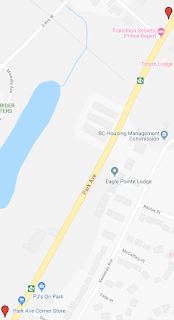 As part of Monday's City Council Session, Councillors Cunningham and Niesh both made note of some issues that they would like to see the city follow up on with the Ministry of Highways.

For Councillor Cunningham the concern involved the growing prospect of injury for those living along Park Avenue, with the Councillor noting of a near miss of his own from a pedestrian crossing the Street in a darkened section.

From his review for Council, Mr. Cunningham asked for the City to send a letter to the Department of Highways expressing concern over the intersection of Highway 16 and Smithers Street.

He observed that now that there is an increase of low cost housing stock being developed along Park Avenue, there is also a growing danger for those living in the area who are crossing the street to reach the convenience store in the area or to go to other destinations.


Mr. Cunningham added that with a growing number of people being housed through both the Anchor Inn and the housing units currently being put in place by Transition House that the lengthy stretch of Park Avenue will be an area that will need to be monitored and addressed.

Councillor Niesh added to the inquiries list for the Ministry of Transportation as well,  asking City Staff if they had any idea as to when the planned improvements along Second Avenue West would take place, a project which was supposed to have been underway by now but has seen a significant delay in progress.


The City's Financial Officer advised that inquiries had been made just before Christmas and indications were that the Ministry was having difficulties in securing contractors and parts for the work creating a delay. She added that since we were now into the New Year staff would check to see what the status of the project was.

The extensive work planned for the Second Avenue West corridor was highlighted by Mayor Lee Brain back in the fall, among some of the features: upgrades to lighting, pedestrian countdown timers, replacement of street names, reconfiguration of of the Crosswalk at Second Avenue and Third Street and a little further into the distance a look at whether to put a round a bout in place at the intersection of McBride and Second Avenue West.

The project was originally proposed by the Ministry of Transportations' Darrell Gunn, however since putting the project forward, he has since relocated out of the Northwest district.

You can review the twin themes on concerns for the Ministry from the Video Archive starting at the 19 minute mark.

For more items of note related to the Monday Council session, see our Council Timeline here.

To return to the most recent blog posting of the day, click here.
Posted by . at 9:55 AM

Email ThisBlogThis!Share to TwitterShare to FacebookShare to Pinterest
Labels: Concerns over pedestrian safety on Park Avenue and fate of Second Avenue work