Back on a regular schedule, BC Ferries adds a sailing next week for Haida Gwaii; while calls for better service continue to be heard


Now that the weather has cleared to a fashion for the time being and BC Ferries has returned to their regular sailing schedule, the Ferry Corporation has added a sailing for next week to try to address the fallout of recent cancellations on their Prince Rupert to Skidegate run. 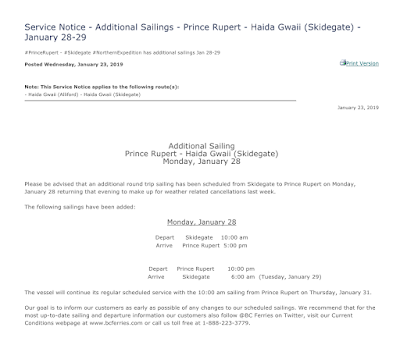 As is often the case during the winter season, the sailings can be impacted by severe weather and travellers are advised to follow the BC Ferries Service Notices page for any updates or possible changes.

Those weather delays of the past have left Haida Gwaii residents and visitors with missed appointments, or revised travel plans; along with delivering an impact on the commercial sector with stores having to revise their shelf stocking plans.

In addition to the troublesome weather, which is beyond anyones control, the winter season woes are mainly a problem with logistics, with the Fall and Winter season this year being used for maintenance for the Northern Adventure which also serves the route.

The missed sailings and extended delays come mainly due to the fact that there is only one vessel, the Northern Expedition to service two routes.

With the vessel also transiting the Prince Rupert to Port Hardy run, it is the Haida Gwaii run that seems to suffer the most impact from any weather delays.

The topic of Ferry Service has made for frequent comments from North Coast Regional District, which discussed their concerns back during the UBCM convention in September of 2018.

The most recent correspondence on the issues  was delivered in November forwarded by way of a letter to the Minster of Transportation and Infrastructure, the document outlines the concerns of the Regional District and issued another call for an adequate and reliable BC Ferry Service for both the North Coast and Haida Gwaii. 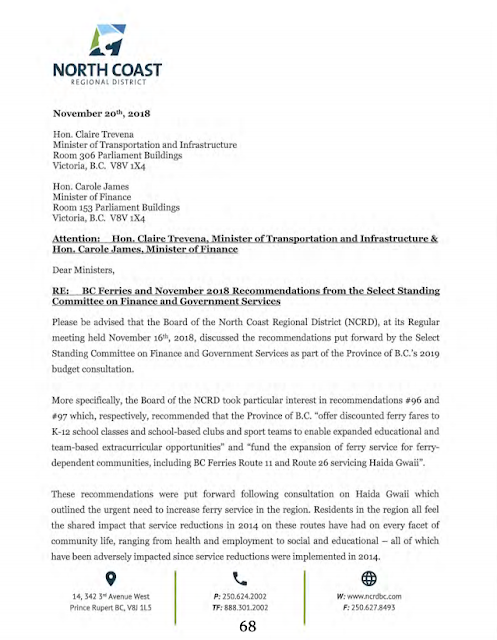 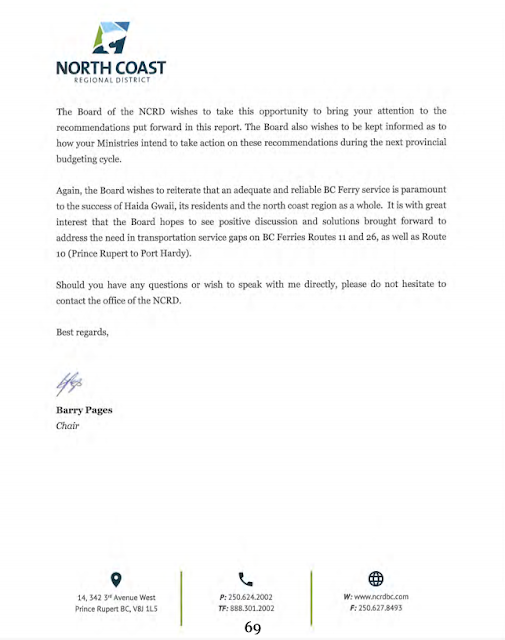 The correspondence from November is included as part of the Agenda package for this Friday night's  North Coast Regional District Council, which could offer the Directors another chance to discuss the ongoing service issues on the Prince Rupert to Haida Gwaii run since they last forwarded their concerns to the Minister.

The topic might also be of some interest to North Coast MLA Jennifer Rice, who often spoke of the need for improved Ferry service for the region while serving on the Opposition side of the House.

Since the NDP formed the government over a year ago however, the public commentary on the Ferry service seems to have diminished quite a bit from the many communication options available.

And while she may be advocating for improvements around the caucus room, Ms. Rice may want to outline for her constituents what steps she is taking to keep the topic at the top of the Transportation Minister's action list.

The MLA last weighed in on the subject with a letter to the editor for the weekly paper back in October of 2017, noting how the Ferry service can't be improved overnight.

Fifteen months of overnights later and with ongoing service issues which continue to cause some increased hardship for area residents, would seem to suggest that some kind of forward momentum on improved service is not only expected, but clearly required.

Ms. Rice may want to take a stroll across Second Avenue West to get some feedback on the Ferries concerns first hand and take back some notes to Victoria for when the Legislature resumes on February 12th.

For more notes related to Marine Transportation on the North Coast see our archive page here.

More background on the work of the North Coast MLA at the Legislature can be explored from our Legislature Archive.


To return to the most recent blog posting of the day, click here.
Posted by . at 9:13 AM