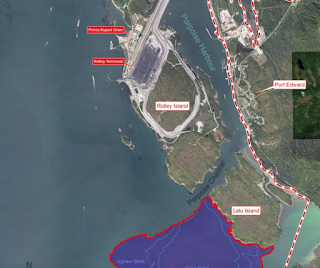 Yesterday's announcement for a moratorium on development for offshore areas of Lelu Island have gained some favourable reviews in the community and the news of protection for Flora, Agnew and Horsey Banks has earned particular praise from North Coast MLA Jennifer Rice.

As we outlined yesterday, the Port decision came following extensive discussions with hereditary and elected First Nation officials on the North Coast, with Port CEO and President Shaun Stevenson making note of the importance of the salmon population to the community.

“We recognize the importance that a healthy salmon population has to our communities, in particular First Nations, and we share this value ... We know that this site has both challenges and concerns with development and there are superior development sites available for future projects at the Port of Prince Rupert that are broadly supported by our stakeholders.”

Following the Port's statement related to its plans for the offshore area of Lelu, Ms. Rice spoke to the announcement through her Facebook page.

The issues related to Lelu Island and Flora Bank have long been of interest to the North Coast MLA, predating her run for office in 2015.

While serving on City Council Ms. Rice and former Councillor Joy Thorkelson were the strongest advocates for Lelu Island. Particularly when it came fo any potential environmental impact on the Flora Bank and adjoining waters, first raising their concerns in December of 2012, with many more reminders for Council to come.

With her shift to provincial politics in 2013, Ms. Rice continued to voice her concerns on the Lelu Island story, a process which reached a pivotal moment on January 25th of 2016 when the MLA signed on to the Lelu Island declaration, the document proclaiming that Lelu Island, as well as Flora and Agnew Banks would be protected for all time.

As the focus on Lelu continued through into the summer of 2017 the question of development was answered for good on July 25th, when despite having environmental assessment approval, Malaysia's Petronas energy,  announced the termination of their plans for the LNG terminal on the Island.

When looking at her years of advocacy on the Lelu questions, one can imagine that with the announcement of the moratorium from the Port on Thursday, that Ms. Rice felt some strong measure of satisfaction from the evolution of the Lelu story.

While the provincial representative for the North Coast has offered up her salute towards the Port announcement, so far her partner at the Federal level Nathan Cullen, a fellow signee to the Lelu Island declaration has yet to take note of the Port's moratorium plan.

You can get a sense of some of their work over the years when it came to the Lelu Island discussion through our archive of notes related to the Pacific Northwest LNG project.

To return to the most recent blog posting of the day, click here.
Posted by . at 12:24 PM