Word it seems has gotten back to Prince Rupert Mayor Lee Brain, that the prospects are pretty slim that Port Edward will be coming around to his way of thinking on the Ridley Island  Tax Agreement,.

That even after another delivery of his ongoing Hays 2.0 talking points, including a wide ranging reprise at last weeks' Prince Rupert council forum which focused on the theme of unfairness that the Agreement is viewed by at Prince Rupert Council and echoed by the fans of the Mayor's Facebook page.

As Mr. Brain recounts for us in a rather strident Facebook post to his political social media page last night , the Port Edward Council debate of Tuesday evening delivered some firm resolve on the side of Port Edward when it comes to the current arrangement, with no plans to renegotiate it, much to the chagrin of the Mayor of the City of Prince Rupert.

Adding on to the insult from the Mayor's view, is the idea that  a candidate at the Port Edward forum actually floated the idea of seeking a revenue arrangement when it comes to the city's Watson Island Intermodal Terminal, which considering the proximity of the Watson Island development to their community, is something that they might be able to make a case towards, should they wish to push that particular issue with the province.

The Full scope of the Mayor's Facebook Face off with Port Edward can be reviewed here, it for the most part retraces much of the same themes we've been provided with over the last two years:

It's the new material to the previous talking points however, that may prove to be the most incendiary for those living twenty minutes from the "Welcome to Prince Rupert sign", those passages of the Mayor's Tuesday night commentary included:

"But after last night’s all candidate’s forum in Port Ed, it’s clear that there is a lot of misinformation and lack of understanding of the issue. It is also clear that Port Ed’s politicians simply believe they are entitled to Prince Rupert’s services and revenues for nothing in exchange.

Despite the fact that they utilize all of our services, Port Edward does not contribute to our Library, the Lester Centre, the Museum of Northern B.C., the landfill, the RCMP, the airport, or the airport ferry – and refuse to do so. This is despite the fact that Prince Rupert shares half of the costs to operate the North Pacific Cannery Museum in Port Ed.

As a result, Port Ed has some of the lowest taxes in B.C. thanks to the taxpayers of Prince Rupert. On top of that, they now have the audacity to claim they should also be entitled to revenues from Watson Island after Prince Rupert suffered through paying the holding costs ($90,000/month) + immense legal bills over the last 18 years to finally remediate the former pulp mill site.

Adding salt to the wound: not only did Port Ed not help with the costs of the site, they continued to receive millions off your backs throughout Prince Rupert’s roughest times.

Let me be clear: Port Edward is getting a free ride and Prince Rupert is paying for it. Port Edward needs to acknowledge that without Prince Rupert, they would simply not be able to sustain themselves as a community."

The District seemed to cover off some of the elements of the Watson Island issues in a letter to the city's CFO back in 2016, that correspondence highlighted the impact that the mill had on their community while it operated and how those issues formed the scope of their approach to the Province when it came to the topic of Ridley Island and the need for the Tax Sharing agreement.

Beyond that correspondence of two years ago, not mentioned in Mr. Brain's overview of how he views Port Edward as taking advantage of the city, are a few financial items of note:

Unlike Prince Rupert, the District of Port Edward does not have a paid full time salary Fire Department and compared to the staffing levels at the city of Prince Rupert, Port Edward has a fairly slimmed down version of staff and municipal workers to pay for.

The District does not own and operate a regional telecommunication and cable company; nor has it decided to embark on some civic subsidized industrial commercial enterprise such as the creation of the Watson Island Intermodal Terminal.

It also has not spent unknown amounts of money on any number of studies and vision plans over the last four years, all to help deliver a narrative for the  current council membership.

Those are all elements of governance that the District has managed to do without and probably have helped to keep the property taxes low and may perhaps answer some of the Mayor's arrogance of a notion that Port Edward may not be able to sustain themselves as a community.

From the Mayors checklist of sins, the Airport Ferry issue is a wider transportation problem that the city has, and one wholly attributable to the airport's location.

If Prince Rupert was to try to force out of town residents to pay a head tax if you will, then most likely, those would be passengers will head down the highway to the Terrace airport, something many seem to do already.

The City could try to make the Airport and its ferry a Regionally funded service, though that is an option that has been suggested many times before, but never seems to get much traction from those living in communities outside of the city limits.

The Museum, Library, Lester Centre and even the Civic Centre are all pay for use based services hosted by Prince Rupert, residents of the District pay when they use them, much like any visitor that doesn't live within the city limits.

Port Edward residents could always stay home one imagines (and considering the welcome message from Prince Rupert of late who could blame them), but that won't be particularly helpful to the fiscal bottom line of any of those organizations that would be affected.

As for the Mayor's laments over landfill usage, Port Edward seems to have more than enough land of its own to develop a land fill site should the relations between the two communities continue to spiral in a downward fashion.

The issue of the Ridley Island Tax Agreement seems more to do with how the Province wishes to handle the issue, as opposed to what Port Edward should, or should not do, or what Prince Rupert has in mind for demands towards its vision of fairness.

The Mayor says that the City is "forced" to give Port Edward the money, when actually the proper term is that the City is "required" to forward the revenue as per the current arrangement that remains in place, much the same as they do in collection of School District Taxes for SD52.

Perhaps District of Port Edward officials remember the City of Prince Rupert CEAA filing related to the Pacific NorthWest LNG project,  a three page document signed by the Mayor offering up the list of concerns and  requests of Pacific NorthWest LNG, all for a project that wasn't even within their city limits and one which saw some opposition expressed by some of the Prince Rupert council members.

The City of Prince Rupert at the time, appeared to want its fair share of revenue streams when it came to the LNG development located in the District, that could be the blue print that Port Edward is looking at when it comes to the prospect of development on Watson Island which is on their doorstep.

The quarrel on the Ridley Island Tax Agreement perhaps is something that the Mayors self proclaimed skills at collaboration, facilitation and mediation should be put to work on, but in a different direction.

With Mr. Brain seeking to get the ear of Jennifer Rice, the local MLA first and then the cabinet of John Horgan's NDP government to see what steps the province can recommend, since its for the most part, up to the province to address the issue that it created in the first place.

Adding some fuel to the fire burning deep in the heart of the Prince Rupert Central Command bunker was Councillor Wade Niesh, who weighs in through the comments section of the Mayor's Facebook post, recounting some of his own recent council forum themes

He also seems to have dismissed concerns of residents of Port Edward about the volume of rail traffic that will pass alongside their community with the ongoing expansion of Port facilities and whatever industry may eventually locate on Watson Island. 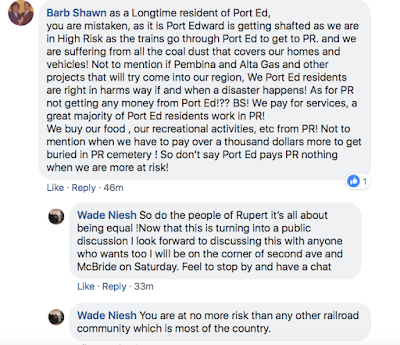 The dismissive nature of Mr. Niesh's comments certainly indicates a bit of tone deafness as to a very legitimate concern of the neighbours to the south.

The increased volume of rail traffic that they will see in Port Edward is something that will have a significant impact on their community and a good portion of that additional rail traffic will come from the city's prime tenant of the Pembina terminal at Watson Island.

The commentary to the theme, coming from a councillor of a town that doesn't face that same rail safety issue, especially after what we know following the Lac Mégantic disaster, is a baffling approach when seeking some common ground towards the city's issue of the Tax Agreement.

On the theme of baffling, the Mayor's contribution to civil debate comes complete with Mr. Brain seemingly taking a page out of the Vladimir Putin playbook of how to get along with the neighbours.

With Mr. Brain offering voting advice to the residents of Port Edward and then issuing a rather ominous warning of unknown measures to come ...

On October 20th, I hope the residents of Port Edward will vote for people who are willing to sit down and negotiate a fair and reasonable deal. Otherwise, the City of Prince Rupert will have no choice but to take more drastic measures to find an equitable resolution.

And being a faithful servant of the Facebook generation, he also asks that like minded Rupertites spread his message far and wide through the social media megaphone.

Following those instructions, Councillor Cunningham and council hopeful Charmayne Carlson both made note of the Mayor's denunciation of the Port Edward approach to the topic, making for their own posts on Tuesday night.

The accelerating rate of the mercurial diatribe from Prince Rupert on the Ridley Island Tax issue has taken on the theatre of Orwell of late, where the new edict seems to be channelling the concept... that Oceania has always been at war with Eastasia.

We imagine that Port Edward's residents will be standing by to see if any head lights are coming down the highway tonight.

More items of note from City Council Discussion themes can be explored on our archive page here.

To return to the most recent blog posting of the day, click here.
Posted by . at 10:04 AM